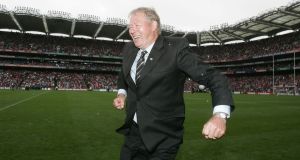 By the end of this there won’t be a shed in Ireland left unpainted. Both Mícheál Ó Muircheartaigh and Brian O’Driscoll have theirs done already, as they told Miriam O’Callaghan on Friday’s Late Late, Brian also revealing that his skip is filled, his gardening’s done, so he’s now turning his attention to learning how to bake cakes.

If his local shops are anything like the ones around this way, then he’ll have to settle for flour-less cakes, the scarcity of the product putting the previous run on toilet rolls in the ha’penny place. Brian was, no doubt, tuned in to Jamie Oliver’s Keep Cooking and Carry On last week, and was possibly as frustrated as ourselves when he showed us how to make an eggless chocolate cake. For those of us with 15 dozen eggs but no flour, this was as useful as. . . what’s it they say? . . . an ashtray on a motorbike.

While Mícheál, as we know, makes the best ham sandwich on Earth, he hasn’t yet taken on the cake-making challenge, instead focusing on keeping himself fit during his spell of self-isolation. “We haven’t gone outside the gate in 14 days,” he said.

His fitness regime? “I do a little bit of jumping, everything like that. I’ve a few old golf clubs in the house. I take them out and I swing them at the air and so on and that’s exercise in itself. I’m quite happy to do it, it kills time. And if you keep wandering around, don’t stand still, be moving and unknown to yourself you’ll have a mile or two done around the corners.”

The only disappointing aspect of Mícheál’s contribution to the Late Late is that it ended. Indeed, there’s something to be said for crowning him our Franklin D Roosevelt and having him address the nation every evening in a fireside chat. Somebody start a petition to make this happen. Now.

One of the many goals people are setting for themselves this weather is to learn a new language, but after listening to Mícheál, you’d soon enough ditch your plans to become fluent in French/German/Italian/Spanish/Mandarin/Swahili/etc, instead vowing to master Irish.

“Dúiseacht le dúthracht le breacadh an lae,” he told us his grandmother used to say, “wake with enthusiasm at the dawning of the day. And that was her wish for every day, she’d wake up every morning and be enthusiastic about the day ahead - that this will be a great day, this will be a great week, to look forward to it positively and with hope.”

“And there’s nothing like hope. . . it’s a good thing to look forward and hope that things will be better - and things WILL be better.”

Having painted his shed and cut his grass and jumped up and down and walked a mile or two around the corners and swung his golf clubs at the air, he took to photography.

“We had a lovely sunset one evening there and I took a picture where the entire western sky was totally red. We sent it around to the cousins and the nephews and the grandchildren and all that.”

He might be 89 but he’s still finding beauty and wonder and newness all around him, like he’s looking at it through the eyes of a child.

And then he completed his pep talk with the loveliest of salutes. “It’s great to see the unity, all the people have come together, they’re cooperating. . . and it’s wonderful to see. Just have faith in the people who are responsible for the recovery and who are doing their level best, they deserve every support they can get. In a few weeks, please God, this will taper off and be gone and be part of history.”

(Did we mention that Mícheál’s Fireside Chats need to happen?).

Jamie, meanwhile, had moved on to showing us how to make tagliatelle with just water. . . and flour, “basic stuff we all have in our pantry”. By now you’d be tempted to swing your golf clubs at the telly. Nothing for it but to go paint the shed.