Pogacar made history with his Tour win, shaking off the race's history may be tougher again 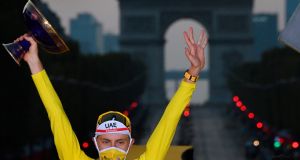 ‘Assassins,” cried Gustave Garrigou, sending his rage directly against the race organisers, who in turn lap it up. No one walks away more impressed by the Tour de France every year than the Tour de France, and this one was no exception.

And this was over a century ago, when the 1911 Tour raced through the Alps for the first time and even though the 27-year-old Garrigou ended up winning he reckoned they had tried to kill him in the process, as well they might have been.

God knows what Garrigou would have made of this year’s Tour, which was the highest in race history, climbing a total of 58,000 metres up all five of France’s mountain ranges – roughly the equivalent of riding up Mount Everest on a bike six and a half times. By all accounts among the hardest too, no matter what prize was being chased, if any at all.

“I just couldn’t get over the racing, there was no let up,” Sam Bennett said during the week, in suitable recovery mode at his home in Monaco after winning the green jersey.

“I was looking at my training stress score for each day, and they were incredible. I’ve never had so many consistent days with that workload. It was the hardest Grand Tour I’ve done, made even harder, actually, because of the green jersey as well. But all the GC (general classification) guys were saying it as well, because there were less sprint days, and not many big breakaways either.”

Given the two-month delay because of Covid-19 it’s also been made harder still for any rider back on their bike for this weekend’s World Championships at Imola, the Italian venue which stepped in at late notice to replace Aigle in Switzerland, with the offer of an arduous 258.2km route including 5,000m of climbing for Sunday’s men’s road race.

Despite such proximity to the finish on the Champs-Élysées, one of the favourites is once again Tadej Pogacar, who wrapped up his Tour debut last Sunday as the first outright winner from Slovenia, and at age 21 years and 364 days, the youngest winner in post-war history.

Strictly speaking, Pogacar (pronounced Po-GA-char, remember?) is the youngest ever Tour winner. In 1909, the first four finishers were all disqualified for various cheating offences, including 34 year-old outright winner Maurice Garin, which meant the race was later awarded to fifth-place finisher Henri Cornet, then aged 19 years and 11 months.

Pogacar certainly didn’t come from the proverbial nowhere: three stage wins in last year’s Vuelta a España already singled him out as one to watch, although no one truly believed he had come of Tour-winning age already, at least not to beat his compatriot Primoz Roglic by almost two minutes in the penultimate time-trial last Saturday.

If Pogacar does win again on Sunday – a mighty ask – he’ll become the youngest world champion since Karel Kaers from Belgium, who was 20 when he won in Leipzig in 1934, and the first to win a Tour-World double since Greg LeMond in 1989. In winning stage 9 at Laruns in the southwest Pyrenees, Pogacar had already became the youngest winner of a stage since 1993, when an even younger American named Lance Armstrong won stage 8 into Verdun.

That tender age alone accounted for some of the scepticism which greeted his victory in Paris last Sunday, as it would any young rider succeeding in the hardest of races and in the hardest of sports; the usually frank L’Equipe headline on Monday described Pogacar as “Jeune et Insouciant” (which translates as “Young and Carefree”), a gently ironic reference to the title of the late Laurent Fignon’s autobiography, their own French rider being the last Tour debut winner in 1983, aged only 22.

Only for Pogacar some of the scepticism is around his UAE Team Emirates, particularly its chief executive Mauro Gianetti, who as well as being implicated in his own doping practices as a rider in 1998, in 2008 also managed the notorious Saunier Duval team, which saw their star rider Riccardo Riccò expelled from the Tour after testing positive for CERA, the new generation EPO.

“I’m too young to remember that time,” said Pogacar, perhaps not entirely unaware that given cycling’s recent and distant past every yellow jersey winner is left to feel some level of guilt by some association. “I was 10 in 2008, and it seems bizarre to me to talk about it because it goes against everything I believe in. It saddens me that people might doubt my performances. My only defence is to have a clear conscience.”

Gianetti’s ex-teammate at Française des Jeux in 1997 Stéphane Heulot said he “felt the urge to vomit” while watching the Tour, and refused to back down on previous comments that Gianetti was “ingrained in doping”.

There are others like me who might be less sceptical about Pogacar as they are about Slovenian cycling. Six years ago, at the Trofeo Karlsberg Nations Cup, a junior stage race held annually in Germany in June, Ireland’s Eddie Dunbar was narrowly denied outright victory by the Slovenian rider Kristjan Kumar, still only 18 and riding as part of the Slovenian national team.

Three months later, as Dunbar was preparing for the World Junior road race in Spain, the UCI, the governing body of world cycling, announced that Kumar had tested positive for EPO in Karlsberg, and the Nations Cup was subsequently awarded to Dunbar.

Kumar was banned for two years, although he wasn’t yet done with being associated with Slovenian cycling. Having made his return to the sport, in February of last year he was handed an eight-year ban after testing positive again after a race in Italy, this time for CERA.

This may well sadden Pogacar but it’s another reminder that cycling still has some way to go before the next yellow jersey winner is not left to feel guilty by some association with its past, because this year’s Tour was no exception.

Lions to play Japan on home soil before tour to South Africa 09:26
Tiger Woods in the groove as he plots a path to Augusta 09:22
No underage or minor GAA to be allowed under Level 5 Covid-19 restrictions 08:53
Ole Gunnar Solskjaer hails players after win over PSG 07:57
Rashford gives Man United another win in Paris; Gordon D’Arcy on Finn Russell 07:34