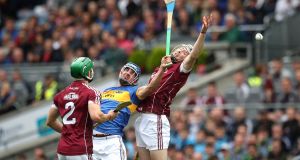 Whenever Pádraig Mannion hit the gym beside the pitch in Ahascragh, he became used to the sound of Tony Keady laughing at his endeavours. Keady was fastidious about his athleticism and fitness but found the gym-obsession of today’s generation amusing.

“I don’t think there was too much of that in his day,” Mannion laughs.

They had a constant back and forth, with Mannion slagging Keady about how few games the 1980s Galway teams had to play in order to win their All-Irelands. Keady would just shrug and grin back at him before saying: “Ten or 12 games is better than ten years of shite”.

Keady had been journeying over from Oranmore to Ahascragh-Fohenagh to coach the seniors. They won a county title and went on to the All-Ireland intermediate final in 2016.

The last time Mannion met Keady was on the Monday before the All-Ireland semi-final against Tipperary. Mannion is only 24 but, like all young Galway hurlers, he knew of the depth of the rivalry between Tipp and Galway in the 1980s and how much of it revolved around Keady.

He was pucking a ball around on the pitch when Keady stopped him.

“He just said: ‘think of me when you are on the pitch’. It was a nice thing to say and it was the last thing he said to me.”

Keady’s sudden death just days after that semi-final win saddened the entire county and revived talk of the influence of the 1980s team on the maroon game. Mannion believes that for all the changes within the game since Galway were last champions, the essential values which Keady imparted to him are precisely the same.

“The principles have stayed the same. Embrace the big occasion and let your hurling do the talking. Work hard to get the better of your man all the time. You can always go back to the roots of the game and they are the same. The basics don’t change. You’d want to make sure you enjoyed it like he did: embrace the occasion and realise how lucky you are to be involved in such occasions and games.”

And this year Galway have played in just that vein; thriving under the usual pressure to deliver; to go one step further. He believes they handled the occasion of the 2015 final quite well but struggled just to stay within their rhythm in the second half.

“That’s definitely something we improved.Even in the semi-final against Tipp in the last two or three minutes, the composure that was shown, that was something we have learned over the years and improved on.”

When the ball was transferred from Johnny Coen to Joe Canning for that immortal point, Mannion remembers feeling certain that his team-mate would nail it. “He is just so accurate that I would have backed him 99 times out of a 100 to put it over.”

The depth and range of Canning’s individual talents – combined with his physical strength – meant Galway management teams sometimes struggled to identify a system that enabled the talents of all six forwards to flourish.

That balance has been a striking element of Galway’s play this summer: Canning may not be having his most prolific season but he is arguably having his best and is fitting seamlessly into the role of distributor/scorer which Micheál Donoghue has devised. Stopping Canning is no longer the equivalent of stopping Galway.

“Over the last few years we have been lacking other players along with him but this time we have a really balanced team especially in the forwards and there are different lads stepping up to the mark. The next day you’d be hoping for a more complete team performance. There are massive leaders throughout the forward line.”

The same is true of the defence. Of the team that started against Tipperary, only Gearóid McInerney and Adrian Tuohy hadn’t played in the 2015 final.

“I think so. That will definitely stand to us and the hype and all that you learn how to deal with it. But at the end of the day it is another 70 minutes of hurling and it’s the same thing really when you put all that to the side. There will be an expectation on both teams on Sunday. Waterford have pressure too.

“They have been knocking on the door for the past few years as well. On the outside it looks like you put in some big performances, but when you go back there are always things to improve on. You are always looking for the perfect performance. I don’t know if it is possible but if we can give a perfect on the 3rd, we’d take it.”

1 Saracens to accept second 35-point deduction and effective relegation
2 How do Klopp’s Liverpool measure up against greats of past?
3 Here is your handy guide to sport on television this week
4 Welcome to Iten in Kenya – home of champions and cheats
5 James Ryan returns to the Leinster fold for Benetton clash
Real news has value SUBSCRIBE