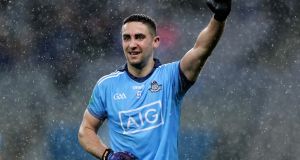 James McCarthy: His consistency and versatility has proved an enormous asset for Dublin over the past decade. Only he and Stephen Cluxton have started all seven of Dublin’s All-Ireland successes. Photograph: Laszlo Geczo/Inpho

Although he’s been an ever-present during this decade of decades for Dublin, it still comes as something of a surprise to note that James McCarthy last month celebrated his 30th birthday – as did his club mate and fellow generation 2.0 Dub, Dean Rock – and this year marks the 10th anniversary of his first league appearance for the county as well as his 2010 under-21 All-Ireland victory.

With the passage of time his importance has become more and more marked. Only he and Stephen Cluxton have started all seven of the All-Ireland successes and his versatility as a super-fast wing back, mobile centrefielder and at times man-marking full back has been a huge asset.

There is the obvious athleticism and gliding pace but his football intelligence shines through so many of the decade’s critical moments.

Even last year, his positioning to block Paul Geaney’s goal attempt when Kerry were in the ascendant helped to calm the drawn All-Ireland.

It goes with other flashes of recall: the tour de force second half in the 2017 final when switched on to the previously rampant Aidan O’Shea, culminating in the catch that started the countdown to the winning point.

Two years earlier, there was the challenge in a replayed semi-final, also with Mayo, that caused Lee Kegan’s shot to drop short when Dublin mightn’t have been able for another score and the point that followed to sound the resurgence.

So maybe it’s a relief to have a period of enforced rest? Not really. Adding to the unreality of the current lockdown is the tele-conference phone call, in his capacity promoting AIG’s ‘Show Your Skills Challenge,’ in support of the 20x20 movement, as he fields disembodied questions coming down the line.

He is within the prescribed two kilometres of three public parks – Poppintree, Albert College and Johnstown – and so is well resourced for amenities but even so . ..

“But it’s weird not training with group,” he says. “A week or two is fine. You’re nearly happy not to be seeing them all the time but after that, you get the itch – especially this time of year, when it’s starting to head towards the summer. You love training at this time of year.”

This was going to be an interesting year for McCarthy. Dessie Farrell had taken over as his career’s third Dublin manager. Unlike some previous seasons when bothered by injury, he was up and running for the 2020 league and had started and finished four of Dublin’s five fixtures, averaging a point a match and also captaining the team in Stephen Cluxton’s absence – “a lovely privilege to have”.

Now, in enforced dry dock for the foreseeable future, he and the Dublin team must, like everyone else, get used to a disrupted normality.

Given that Farrell only took over in mid-December and had the team holiday in between then and the start of the league, and that any championship that may take place won’t come with enormous latitude for preparation, isn’t it hard to see much change in the Dublin team this year despite the number of new players tried during the league?

“Dessie would be no different to Jim in that he’d always pick players who are going well. If you’re doing the work and showing up well there’s definitely a chance you’ll play.

“Maybe the advantage the more experienced players have is that they know how to get themselves right and the amount of training to be doing. It’s important to try and stay fit but if you can give advice, it’s that you don’t want to be doing too much either or you’ll burn yourself out. It’s about maintaining a balance.”

He sees the shared positive experiences of so many players as a major asset for the team, as they hope to get back on track for a potential sixth straight All-Ireland, building on the extraordinary record of Jim Gavin’s six titles in seven championships.

“We’ve been together a good few years so there’s a trust there when it comes to big games. And that definitely helps us.”

McCarthy has been around long enough to remember days when Dublin were synonymous with more downbeat experiences but says that made its contribution as well.

“Look, I’m still one of the ones that was around maybe towards the start of my career with Dublin (when) we lost a few big games. It’s always good to have that in your memory. Even a few years ago when we were going for five leagues in a row [the 2017 final, lost to Kerry] – it’s nice to get those little reminders every now and then, the taste of defeat I suppose, and that helps sharpen the mind.”

He appreciates that there’s no telling when the season will again be up and running but hopes for the best.

“Obviously at the moment health is more important but sport is important too. It’s brings a lot of happiness and joy to people and they’re missing it. I think it will be a big lift to people when it does come back and hopefully that will be soon.”