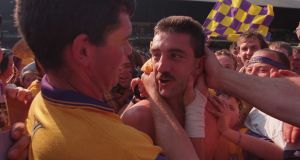 Martin Storey: led Wexford to glory in the last knockout All-Ireland in 1996 when the Model County defeated Limerick in the final. Photograph: James Meehan/Inpho

Wexford great Martin Storey, the last man to lift hurling’s Liam MacCarthy Cup at the end of a knockout campaign in 1996, has said a similar scenario could be on the cards this year.

The three-time All Star acknowledged first of all that there’s no guarantees any sort of championship will take place given the Covid-19 crisis.

Storey suggested that even a condensed inter-county competition, based on the old straight knockout structure, would have to be getting underway in mid-July, with a view to a late September finish.

He also maintained that midweek inter-county games, as well as schedules that allow for club and county games to run concurrently, would have to be strongly considered.

Tipperary won last year’s All-Ireland despite losing to Limerick by 12 points in the Munster final, a scenario that couldn’t occur in a straight knockout format.

“Sure look at ourselves in ’96, Meath had beaten us in a league game in Bellefield the previous year,” said the All-Ireland-winning captain.

“Was anyone tipping Wexford to win the All-Ireland in ‘96? Not too many. You’d be bringing that whole dynamic back, where a big team could have an off day and they’re gone. It would be a totally new pressure keg for all of the current players who have only known the back-door system.

“There’d be none of this trying to find your best team in the group stages or maybe finishing the odd game with a team stronger than the one that started it. It would be strongest teams out every day and everyone gunning for it right from the off.”

Storey outlined the level of hope that exists in the GAA community for the championships to take place, even condensed versions.

“If this thing gets cleared up and everyone was healthy again wouldn’t we all turn up to the opening of an envelope?” he said.

“We’ll have to wait and see first and foremost if there’s any championship at all. If what’s coming down the road hits us as hard as it’s forecast to, will there be any championship? Ultimately the GAA is still a hobby for us all, as much as we obsess about it and put our lives on hold for it, it’s still a hobby and not a necessity.

“My feeling would be that you’d have to be starting it by mid-July and you’d be trying to finish it around the end of September. You could then run your knock-out competition and I think running hand in hand with that would be the club games.

“I don’t think it would be fair to play the inter-county competitions and then turn around to clubs and say, ‘Right, there you go lads, you take October to December’. For the year that’s in it, it would all have to run hand in hand and if players are lost by either side then everyone has to be man enough to accept it.”

Storey reckons that if training and games are allowed to resume and the championships do go ahead, the GAA should seriously explore midweek matches between county teams.

“Teams might have to play twice a week, depending on what schedule is there,” he said. “That will suit the stronger counties but it might be either that or nothing.

“The GAA has always been a bit too tied to Sunday games anyhow, in my opinion. What’s wrong with Wexford and Kilkenny meeting on a Wednesday evening? Or a Monday, Tuesday, Thursday or Friday evening? It’s only in people’s heads through tradition that it has be on the weekends.

“People will argue that players work but sure club leagues and county challenge games are played on midweek evenings all the time. I think players are professional enough that they could hack it, particularly in the circumstances we’re in. Let’s be honest, if it’s Plan A, B or C, everyone will be only too delighted to accept whatever is going if it means games can be played.”