Stars of Erin: A microcosm of GAA clubs coming out of lockdown 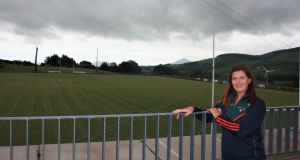 Stars of Erin secretary Gaye O’Brien at the club’s grounds on the Dublin and Wicklow border.

One club, one life, one set of Covid-19 reopening guidelines and one different set of challenges. Take Stars of Erin, among the oldest clubs in Dublin, with a distinctly rural feel, famed as the highest in the country and where the odd stray ball could end up in the next county, the Wicklow border being just a few fields away.

With that it also presents a sort of microcosm of GAA clubs emerging from the three-month lockdown in time for the resumption of adult training from Wednesday, with challenge games allowed from Monday, before a return of official club fixtures from July 17th. They’re all itching for action, only they’re not all there yet.

Stars of Erin secretary Gaye O’Brien, who also serves as their ladies’ team manager, was overseeing the final phase of the reopening guidelines at the club grounds at Glencullen and explains why they can’t and won’t rush that completion.

“The latest time change came very quick, on Friday evening, from the middle of July originally, then the 29th of June, to clubs opening today [Wednesday] for adult teams, but we’re just not ready yet,” she says. “There are still a lot of things we need to put in place, and we couldn’t rush it either. We want to do it right, because the health of our club members is paramount, obviously. The last thing we want is a case of something happening, when we haven’t all bases covered.

“Everyone is very, very eager, and I’m hoping our ladies’ team will be out on that pitch on Monday night. And I think the men’s team might get there on Sunday morning. Everyone is itching to come back, but we’re happy to wait another few days, we’ve waited this long. We couldn’t take a chance.”

They club may be just 10 miles crow-flying from O’Connell Street, yet a million miles from some of the booming Dublin super clubs, only being smaller doesn’t necessarily make it easier: “We’re basically following all the same GAA guidelines, whatever they’re saying.

“The Covid-19 health questionnaire, that’s done online, by everyone, players, team personnel, parents, basically anyone entering the club grounds. It’s only players and team personnel allowed in for the moment anyway, and there will be a one-way system for parents to drop their children off, and who can then make their way down to the pitch, and back up another way.

“And originally they wanted every club to have a Covid officer, now they want every team to have a Covid supervisor. Which is actually better. We’d a meeting here last night and we’ve put that out today that we need a supervisor, and what they’ll be responsible to do, which is to inform their team of all the protocols, keep attendance sheets, sanitising, all that. The balls, the gear, the cones, our first aid kits, all of that has to be properly cleaned. And reporting any non-compliance to the executive.

“So the Covid officer will more than likely end up being a team mentor. I’m already the one for the ladies’ team. But if you don’t have a Covid supervisor, you’re team can’t train. It can be a parent too, but it has to be someone who will be here, and take it seriously.”

The club currently fields 18 teams, including 14 at juvenile level, plus adult ladies, adult men’s football, with a men’s hurling team just started this year. “Our first men’s hurling team,” says O’Brien, “and I think they only got to start one league match.

“We’ve only around 400 members, and very little of that membership has come in yet. And we need to decide to go for the year, knock something off. But we won’t turn anybody anyway. But membership took a complete whack. Literally when it all started, membership was starting to come in, then completely shut down. And we still have to pay registration fees, insurance, bills. Out lotto went. All that’s been the biggest challenge.

“So we’re already down, and now we’re putting a hand sanitiser unit in the car park, at the entrance to the pitch, plus the signage. We’re hoping the GAA will come on board, there was that Government funding announcement last week, and I’d like to think there will be something there.”

There will also likely be a hit on the competition schedule: “The first league starts July 17th, although we haven’t got any kind of fixtures yet. So between cups, leagues, championships, they’re not going to be able to run them all. We’ve a lot of teams that want to play at the same time now as well. And pitch space will be a problem, because you’re only allowed so many in each group, we’ll have to split the pitch into four, section it off that way.”

The priority, in all situations, is to help ensure no cases do occur: “There’s no real guidelines on that, yet, but if there is a case, I imagine the club will be shut down again. The chances of contracting Covid-19, in our outdoor setting, is very low. And because we’re moving all the time, it’s casual contact, not close contact.

“And there will be some people who may not want to come back, who will be nervous, and understandably so. And we’d have no problem with anyone deciding it’s still too early. We keep saying as well that personal responsibility is the huge thing, that’s really what comes into play.”

1 Limerick’s Shane Dowling forced to retire at 27
2 Tactical test awaits Dettori and English King from stall one at Epsom
3 In turmoil on and off the pitch: Where did it all go wrong for Barcelona?
4 Coronavirus has turned Viktor Hovland into long drive champion
5 Joanne O’Riordan: Money and global pandemics won’t break Michelle Finn’s stride
Real news has value SUBSCRIBE

Lewis Hamilton: F1 title win would mean more due to Black Lives Matter 20:02
Sebastian Vettel: This Formula One season could be my last 19:17
French Open set to allow 60% of capacity crowds in September 17:55
Tactical test awaits Dettori and English King from stall one at Epsom 16:09
Six to go forward for Aidan O’Brien in Saturday’s Epsom Derby 15:15