Sky Sports and RTÉ prepare for a championship like no other 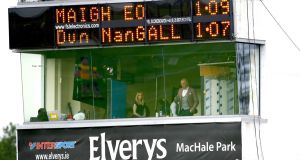 Studio spaces will have to be changed and in a much bigger space. Photograph: James Crombie/Inpho

Three weeks from now, it will be up and running. A championship delayed will not, after all, be a championship denied. Laois will play Dublin in Leinster hurling at six o’clock on a Saturday night and the Sky Sports cameras will be there to take it all in. The following day, RTÉ will have Limerick v Clare in Munster hurling, a game that doubles as the 2020 league final.

From there, it will be breakneck stuff. The latest championships ever played will also be the quickest. Fifty days for the hurling, 49 for the football. On Halloween weekend, there will be 13 championship matches across the two codes – and that’s before you get into Joe McDonagh, Christy Ring and the rest. There’s only nine the following week, nothing too hectic – except three of those are the Leinster and Munster hurling finals and the Connacht football final.

As reported in the past few weeks, all of it is to be broadcast live since virtually nobody will be able to go along and watch. The GAA has loosened out its previous broadcast agreements with RTÉ and Sky in order to bring every match to the public. Up north, the BBC will show six lives games out of eight in the Ulster championship with the other two deferred. A championship like we’ve never seen, meaning unprecedented challenges for those in charge of ensuring we get to see it.

“Basically, 12 months of sport has been backloaded into a three-month period,” says Sunday Game producer Rory O’Neill. “The championship would be a big enough challenge in a scheduling situation if you were doing it on its own. But when you have to factor in all sorts of other things like the FAI Cup semi-finals, the rugby internationals, the European qualifier if Ireland get past Slovakia, the Irish women’s huge qualifier for the Euros, all of that means a huge crunch in a four-week period.

“The scheduling has been almost as big a job as actually covering the events will be. It’s a once-off so people have been more flexible than they usually would. All the sports organisations have been very understanding. They all are conscious that sometimes it’s going to take one of them moving a game that they otherwise would leave where it is, purely so that the public can see it. We have found it easier to get games shifted here and there, across the three sports.”

The upshot is that while it’s true that all games will be broadcast, it won’t be a case of just flicking on the box for some of them. As of now, the plan is for there to still be only four broadcast slots per weekend – one each for Sky and RTÉ on Saturday and two for RTÉ on Sunday. Some of the more down-the-bill fixtures will find a home being streamed on RTÉ News Now, the RTÉ Player or GAAGo.

“The reality is that when you get into streaming, you’re going to be lucky if they all get shown without a hitch,” says Sky’s GAA producer Ciarán Ó hEadhra. “Satellite feeds are so much more reliable, obviously. You can guarantee, barring a catastrophe, that they will hold up. If you’re streaming off broadband, you’re more than likely using a commercial broadband network and there are so many more factors to take into account there. It could just drop, plain and simple, as it has done in counties throughout the club championships.”

With 11 channels to choose from, scheduling won’t be a problem for Sky. But the vast array of sports covered by the mothership makes for its own issues. Ó hEadhra’s co-pilot Ruaidhri O’Connor usually walks straight from a summer of GAA to spending his winter staffing Sky’s darts coverage. The world of sport stopped and now it’s started again, all in a glut. Finding bodies to make it all work isn’t straightforward.

And even when you do, the simple process of pointing a camera and plugging in the lights isn’t so simple any more. A commentary team usually consists of a commentator, a co-commentator and a sound engineer, generally squeezed together cheek-by-jowl in whatever small box a GAA ground can provide. That doesn’t fly in a socially distanced world.

Same for studios. RTÉ’s box up on the seventh floor of Croke Park, a familiar sight to anyone who’s ever watched a GAA broadcast, is now more or less obsolete. Or at least it is for the purposes to which it has always been put. It isn’t exactly small but it isn’t big enough for a presenter, a panel and two camera operators to be able to all stand two metres apart. Same goes for Sky, who will have to completely reconfigure their usual mobile studio.

“It won’t be what we’re used to, which was two on one side of the studio, two on the other, touchscreens, all of that,” says O’Hara. “Even the touchscreen presents its own problems in a practical sense because you can’t have more than one person operating it. They would be physically touching it and in a coronavirus world, we can’t all be touching the same surfaces directly after each other. So there’s a lot of that sort of detail that we have to get sorted out.”

Almost nothing will be what we’re used to. RTÉ won’t be able to grab a couple of ex-players from the crowd to stand down by Hill 16 for a handy 15 minutes of build-up. The spaces between games in a double header will be longer in order to leave room for extra-time and penalties in the first game. There’ll be no vox-pops from Jones’s Road, no colour from Liberty Square.

It remains to be seen whether or not there’ll be fake crowd noise. RTÉ are reasonably certain they’re going to go without it.

“My view on it is that we should go heavier with our boom microphones around the pitch,” says O’Neill. “It will give a real insight into the game as it is played and what’s going on. That, to me, is a better backdrop than the fake crowd effects. That’s what we’re working on. And I do think there will be a huge element of curiosity around the fact that for the first time we’ll be able to hear everything that’s being said.”

Everything means everything, though. What about all the effing and blinding that will no doubt assault our sensitive ears?

“I think it’s fair to say that kids hear swear words when they go to watch sport. If they hear one or two in our coverage, it doesn’t mean that we’re endorsing or condoning anything. I don’t really think it’s up to us to be making apologies on air. One, it draws attention to it – people are nearly rewinding to hear what was said. And beyond that, I think everyone knows that they’re empty apologies. When you hear a commentator apologising for bad language, does anyone think for a second that they mean it? You’re not really sorry, you’re only saying it to tick a box.”

As for Sky, they are working on being able to find a way to do it.

“Research has shown that more fans prefer it in certain sports than don’t,” says Ó hEadhra. “Particularly stadium sports, they do enjoy it. I found that myself – when sport came back, I was so desperate to watch it. I was watching Bundesliga 2 games and loving it. My initial reaction to augmented sound was that I wasn’t sure about it. But when you have to watch a sport without it, it really felt like it lacked atmosphere.

“So it creates big challenges for the broadcaster. Someone who heretofore was a technical supervisor is now required to editorialise. Do you place a boo sound effect in? Are you correct to do so? One of the reasons it has worked in soccer is because of the video game industry – they have a bank of audio that they can pick from and use for each team and each stadium. The challenge for broadcasters in the GAA is creating that bank of sounds from scratch. We’ll make a call on it in the next week or two. If it’s feasible, we’ll do it.”

Through it all, perfection is likely to be an unreachable target. Doing all this would be hard in normal times. Doing it when so many health and safety hoops have to be jumped through, when the country’s shoulders are slumped already and when nothing on this scale has been tried before is going to be wild.

“There will be problems and it’s not going to all run smoothly,” says O’Neill. “We know that. There might be hiccups along the way. We might get to a Friday night of a weekend and the news comes through that five players from one team have had positive Covid tests and the game we’re covering on Sunday gets postponed. If it happens, it happens.

“We’ll react and we’ll move our trucks to whatever other part of the country we have to and we’ll get on with it. There’s going to be things going wrong but I think people are going to understand the times we’re in and roll with it a bit.”

SKY SPORTS
A new face in the presenter’s chair as long-time TG4 and RTÉ broadcaster Gráinne McElwaine takes over from Rachel Wyse. Brian Carney will be alongside, with a pundit roster that includes Kieran Donaghy, Peter Canavan, Paul Earley in football and Ollie Canning, Jamesie O’Connor and Nicky English in hurling.