Sinéad Goldrick pondering a return to football Down Under 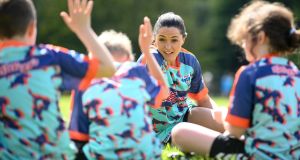 Sinéad Goldrick is listing off all the reasons for and against a return to football in Australia and each one sounds like a blessing out of disguise. There are no curses when club, county and foreign country are all at her beckoning.

For now, Goldrick is content to keep things in exactly that order: back playing with her club Foxrock-Cabinteely last weekend, Dublin’s opening game in the championship now set for the end of October. Goldrick also has until the end of next month to decide whether or not to take up the offer of a second season contract with Melbourne in the women’s AFL, which doesn’t restart until February 2021.

It may yet be a case of combining all three: Dublin women’s football manager Mick Bohan was content to let her and team-mate Niamh McEvoy off last year, after they helped seal Dublin’s historic three-in-a-row. The 2020 final, now refixed for December 20th, the day after the men’s senior final, is a still a long way off and, in the Covid-19 sense, in more ways than one.

“I suppose we’ll be talking to Mick, and the team, and every team has different ways of doing things,” says Goldrick. “Dublin will be my first priority over the AFL, just with Covid-19. Melbourne are back in lockdown and still only out for an hour a week.

“So there are just so many factors there that keep changing and you kind of have to take all the factors into account, and it will be a conversation with Mick, and whatever he says I’ll be happy to do because Dublin is my priority.”

Mayo footballer Sarah Rowe is in a similar position, undecided yet about returning for a third season with Collingwood, the difference there being Mayo manager Pat Leahy is adamant it has to be county or foreign country, and not both.

For Goldrick, also a seven-time All Star winner with Dublin, there may be room for a balancing act: “I don’t know, to be honest, I wish it was straightforward and black and white, but there are just too many elements to think about.

“The way I’m looking at it right now is that I’m just so happy to be back playing football. You do think that it might be cancelled or things might come up, which could happen. I’m accepting the reality that in a few weeks time it all could be pulled.

“Even before we had a club game on Friday, we were just like, ‘girls, we’re lucky to be in this position’ and that’s kind of what I’m doing because if you keep thinking that the Dublin championship might not go ahead, or the club season might be cancelled, I know for myself I’d kind of lose motivation to have that drive to try and perform.”

Now aged 30, and with three All-Ireland medals in her back pocket (she missed Dublin’s 2010 win as she went travelling), the opportunity to continue in the semi-professional game Down Under has natural attractions of its own. After a decade of working in Dublin it was also the chance to explore new career options.

“Once I was able to do both, I was happy, and I think as Mick said, I don’t think I would have gone if I wasn’t happy. I’d been working for the past 10 years in various jobs so I was happy just to take a reset. On my days off I was working with the coaches to try and improve and then I got really into yoga. I know everyone says that, when they have time to switch off, but I felt that I just needed a little break so it was just focusing on football and have time off to think about things.”

Goldrick scored the crucial goal in Dublin’s win over Galway last September, before the record crowd of 56,114, but knows full well numbers like that are rare in the women’s game.

Her debut season with Melbourne ended two weeks prematurely, due to Covid-19, and there are some things about the game Down Under she’d like to see replicated here.

“The professionalism, in terms of the promotion, like, after each game your stats are up on an app so everyone in the country who is an AFL fan can see how you’re playing. So it was just nice to go over and to try something new like that.

– Sinéad Goldrick was speaking at the Kellogg’s GAA Cúl Camp in St Brendan’s GAA Club, Dublin, also attended by Siún Brophy, the one millionth child to register for the Cúl Camps since the beginning of the sponsorship in 2012.