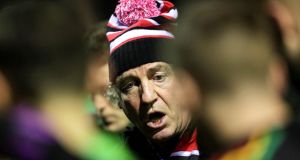 It may find itself increasingly squeezed in – or indeed squeezed out – of the GAA calendar but there is still no escaping the true romance of the Sigerson Cup.

Rarely, if ever, will that be more evident than the 2020 final showdown between Dublin City University (DCU) and the Institute of Technology Carlow (IT Carlow), set for the DCU Sportsground (Wednesday, 7.30pm).

DCU are one of the modern giants of college football, winning a first title in 2006 and adding three more since, but it’s a unique occasion for IT Carlow and especially their manager Pat Critchley.

Last Wednesday, having already twice defied the odds in the getting there, Critchley’s team won their semi-final, thanks to an injury-time goal against Letterkenny IT, a team under the management of Donegal football deity Michael Murphy – with that securing a first ever Sigerson Cup final appearance for IT Carlow.

Critchley is also considered a deity by many, not just in Gaelic football, but also in hurling, handball, basketball and on percussion – his former band The Mere Mortals, who started out as The Drowning Fish, among the few chosen ones to play the first Féile in Thurles back in 1990. Also in that band were his former Laois hurling team-mates, Ollie “Shergar” Plunkett and his brother Seamus “Cheddar” Plunkett.

Also known as “Zoom” Critchley, his hurling pedigree is certainly unique. He became the first and only player from Laois to win a hurling All-Star in 1975, named at midfield on a team that also included Nicky English, Joe Cooney, and Liam Fennelly. No mere mortals there either.

Critchley also won eight Laois titles with his club Portlaoise, four each in football and hurling, and went on to coach several clubs to success, including Carlow’s Éire Óg to the Leinster title in 1998/99, also managing his native Laois in hurling in the early 1990s.

By his own admission, basketball was possibly the sport to which he was best suited – Critchley played several seasons with Portlaoise in the National League and is still leaving his mark on the game. Earlier last Wednesday, Critchley coached Scoil Chríost Rí, the Portlaoise girls school where he taught PE for 32 years, to a first All-Ireland Under-19 “A” basketball title (having also won every other underage title).

From the National Basketball Arena in Tallaght, he headed straight to Inniskeen to face Letterkenny IT, seen as a 50-50 game, especially given IT Carlow’s progression. In the opening round, they defeated three-time former champions IT Tralee, then in the quarter-final dumped out defending champions UCC, the 23-time Sigerson Cup winners, including the first year of the competition in 1910/11.

Critchley played Sigerson himself almost 40 years ago with Thomond College, now the University of Limerick, while training to become a teacher in PE. He has also been seconded to Laois GAA in a variety of coaching roles over the years, but still puts the college competition out there on its own.

“The college game is very different from either club or county,” Critchley said after that memorable semi-final win over Letterkenny. “With the club game you’ve got married guys, older guys, but young lads in the college, they’re living together, with each other, all the same age. And the whole thing is about development, and developing players, and college football is very innovative.

“I know I played myself 30 years ago, with the likes of Pat Roe, and the stuff that was going on at the time, the college game is cutting edge, and it’s still cutting edge. It’s great to be still involved.”

Indeed his IT Carlow team includes a spread of players, seven different counties represented on the team that overcame Letterkenny IT, including rising Offaly star forward Cian Farrell and Adam Steed from Kildare.

Critchley’s calm temperament and near shyness in front of any camera may be in some conflict with his continued success, but it doesn’t hide his winning psychology and deep competitive spirit, which clearly trickles down to the players and was also outlined in his 2008 self-published biography, Hungry Hill.

DCU will start as standout favourites, having beaten UCD 1-15 to 0-03 in the other semi-final, but that doesn’t bother Critchley: “We were underdogs for the first two games and will be underdogs again. But it’s fantastic to be there and to be preparing for it. There’s a great buzz around the college, a great buzz with the lads and we’re really looking forward to it.

“They’ve a great spirit about them, great character about them. We were four points up (against Letterkenny IT) when that goal went in but they just keep going to the final whistle and we just about got over the line. Down in Tralee we were six points down with 14 minutes to go and kept going. We were eight points up against UCC, they brought it back level with 10 minutes to go and we went on and won it again.

“We’re there now and we’re going to give it a right good crack.”