Association says 11-week window is being undermined by intercounty demands 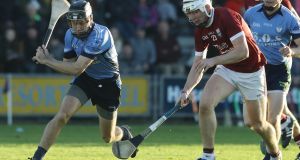 Controversy had arisen over reports that Wexford and Waterford were going to end their hurling championships early. Photo: Lorraine O’Sullivan/Inpho

Amidst renewed friction between club and county, the Club Players Association has called on the GAA leadership to enforce the association’s Safe Return to Gaelic Games roadmap. A statement on Tuesday expressed concern that the 11-week window granted to club fixtures was being undermined by intercounty demands.

According to CPA chair Micheál Briody: “Suggestions of running of championships in blitz format or shrunk to a very tight timeframe to enable county preparations are sacrilege and will have long lasting implications.”

One county chair, who didn’t want to be named, told The Irish Times that it was frustrating to use the 11 weeks for an extended championship when this was potentially going to disadvantage the county team against opponents, who plan to run off tighter formats.

Controversy had arisen with news that Waterford and Wexford planned to conclude hurling championships quickly, in the latter case by the end of August, which would enable the county hurlers to have a clear run at players with the imminent return of county training on September 14th .

This was rejected by Wexford chair Derek Kent, speaking on RTÉ, who said the August conclusion was to do with the better weather that month and the county’s lack of floodlit facilities and also in the context that the hurling championship attracted roughly four times the attendances of the football.

The CPA acknowledged: “The GAA have provided very clear and unambiguous leadership in completely closing club facilities at the height of the crisis. This undoubtedly saved lives.”

Commending “clubs and their members for coming together to help others in their communities during the pandemic” and saying that the 11-week window for clubs, “would bring a great lift to communities to get our games back under way,” the statement also outlined some “concerns we are asking GAA leadership to address”.

These included asking what Croke Park would be doing to ensure that club players were getting the full use of the 11 weeks and not being moved sideways to accommodate county teams and also to prevent players being pressured into resuming county training before the official starting date.

“Already we have seen different counties proposing blitz competitions to get club competitions out of the way so their intercounty teams can resume training as early as possible. Is this not a once in a lifetime opportunity for the leadership of the GAA to enforce fairness on each county so a level playing field is achieved?”

Since publishing its roadmap, the GAA has been firm in the view that it is up to counties to organise their own championships and within the counties for clubs to make their views known.

“We were pressed to allow counties go their own way,” according to one source, “right down to what format was to be used. That was accepted because trying to impose ‘one size fits all’ wouldn’t be practical. Counties can’t really have it both ways – wanting autonomy in running their own championships but looking for us to intervene in others.”

The CPA is, however, of the view that the new calendar should be enforced through the powers given to the GAA Management Committee in April’s special congress.

“In some counties, intercounty managers have very strong influence over the fixtures scheduling. We call on Croke Park . . . to take a stand once and for all on this and rule with appropriate sanction.”

Liam Griffin, a CPA executive member, referred to former GAA DG Páraic Duffy’s spotlighting five years ago of the continuing difficulties in the areas of player overtraining and burnout and the provision of an adequate fixtures structure.

“We fully acknowledge that there should be no need for a CPA if those findings had been taken seriously into consideration. Regrettably despite the CPA’s engagement with the Association over almost four years now we have been unable to make satisfactory progress on the GAA’s own findings.”

Meanwhile, the CPA’s recent agm, which took place remotely, saw some changes in administration. Tommie Kenoy and Joan Kehoe took over from Michael Higgins and Anthony Moyles as secretary and treasurer, respectively.