Seán Moran: Without matches, the GAA is no longer the GAA 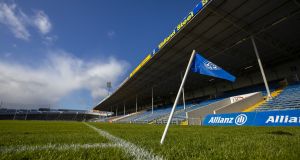 The prospect that club activity might get started more quickly appears to be disappearing into realms of super-optimism. Photograph: Tom O’Hanlon/Inpho

In the dim and distant past when the handful of us that constituted the national media turned up to the old Croke Park Ceannárus to get “briefed” on the previous year’s governance, one of the recurrent features of the financial report was the struggle to reduce the importance of gate receipts to association revenue in general.

The idea used to be that if you could get down below 70 per cent and into the mid-60s, so much the better because it meant commercial revenues were doing better.

In more recent decades that percentage fell all the way to 37 per cent in the heyday of rugby and soccer at Croke Park but eventually current director general Tom Ryan, then finance officer, stated 10 years ago that there actually should be a 2:1 ratio between gate receipts and commercial; otherwise the GAA stops being a sports organisation and becomes a trading company.

It may feel irrelevant in these times of crippling uncertainty where both attendances and associated business activities have collapsed but there is a core truth in the view.

Without games the GAA is no longer the GAA.

Former president Liam O’Neill’s thoughtful comments on these pages this week emphasised that the games could not be farther from the thoughts of most members, who had more vital concerns pre-occupying them.

He was right to confront the focus on the association that restricts itself to when and how the 2020 championships will be played with the reassurance that the games will be there at the end of this catastrophe.

“The games are the expression of the love and care we have for the community,” he said in originally unpublished remarks, “but they’re not the main thing, right now.”

No one would convincingly argue otherwise.

The problem for the GAA is that the games are the predominant expression of everything about the association. In their absence there is the danger of an existential drift: “I think, therefore I am,” rendered as, “we play, therefore we are”.

In the terms of the eternal cliché the club is the bedrock of the association but that’s not some item of dogma to be learned off by heart; it’s a reflection of reality. Clubs are where children, young people and adults play the games. Other adults volunteer to facilitate these activities.

The active membership and the broader community celebrate success, console each other on failure but all the time take fulfilment from keeping the games alive and relevant to each rising generation and the social capital that involvement creates.

Intercounty competition is the highest level of this and draws in the national community through interest in the games and their top exponents or the direct association of being involved in the specific counties. Or better still having nurtured some of the players, who are centre-stage.

Why should anyone feel better about life because their neighbours’ kid is a terrific hurler or footballer or because their son or daughter plays on the same team as someone who occasionally lights up the biggest stage? Hard to rationalise but it’s true.

RTÉ broadcaster Des Cahill, a stalwart of the Cuala club in Dalkey, felt awkward enough about his obvious loyalties before an All-Ireland to protest mildly that everyone likes to see their friends’ children doing well.

That’s it in a nutshell. Those concentric circles of loyalty ripple out all the way from the local to the national and they are expressed through the games.

The engaged and active communities that gather around clubs to promote those games are also available to help in times of need.

Many GAA administrators around the country have been unexpectedly busy in the vacuum of recent weeks liaising with local authorities to organise voluntary tasks for the alleviation of pressing difficulties, from shopping to other errands and even the basic act of communicating with isolated people.

It’s the type of things clubs do anyway – raising money for charity or assembling funds to improve facilities. A great local resource, deployed to help others in the community but established to provide recreational amenities and a sense of identity.

The games have none of the commercial imperatives of professionalism. They don’t need to find money to pay players and the temptation to go behind closed doors for the broadcasting revenue isn’t really there.

Risks that in other sports can be compensated by generous pay and alleviated by well-resourced operations won’t be palatable to amateur players with jobs to do during the week and no financial padding.

Hopes that club activity might get started more quickly still founder on the requirements of social distancing as long as that remains necessary. It would be, in the words of one senior official, “a huge morale boost” to be able to play anything but the prospect appears to be disappearing into realms of super-optimism.

In the meantime, will the Bloody Sunday centenary match get to be played in November? Chances of the 50th All Stars scheme proceeding are also receding. All of the underage cohorts at under-17 and under-20 are in danger of becoming lost generations.

These are concerns that pale beside the unnecessary deaths of loved ones but they do go to the heart of communities.

Clubs are currently working hard to help their neighbours and buoy the spirits of their members and supporters with defiant enthusiasm, “we’ll be back – we’re going nowhere”.

Yet without the games, something essential is missing and can’t be regained until life returns to the empty fields.