Seán Moran: Welcome to the GAA’s world – 50 years ago 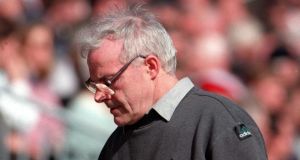 Art McRory: captained Tyrone to the All-Ireland junior football title in 1968 and managed the Tyrone senior teams that reached the 1986 and 1995 All-Ireland finals. Photograph: Tom Honan/Inpho

Fifty years ago this month, there were a few familiar preoccupations in the GAA, including distribution of resources and a lament for simpler football from the days before tactical innovation.

This much can be gleaned from Gaelic Weekly News, published in early October 1968.

It’s impressive that Gaelic Games was able to sustain a thriving periodical in those times whereas nowadays, beyond the estimable Gaelic Life in Ulster, this no longer happens.

Aside from the stories and features, there are very recognisable contributors. Well-known journalist and GAA columnist Eugene McGee – later to manage Offaly to the famous five-in-a-row busting All-Ireland in 1982 – was cutting his reporting teeth in those days and wrote an interesting breakdown of revenues from the National Football League, which in those days was about to start for the 1968-69 season.

The previous season’s finalists, Down and Kildare, had earned £3,944 in distributions from the final and winners Down netted £7,773 from the whole competition.

Other familiar names included the late Raymond Smith and Liam Campbell both of whom had pieces published. Smith was a high-profile print journalist in those times whereas Campbell was an established Radio Éireann Gaelic games broadcaster.

His misfortune was to be sandwiched between the two Micheáls, O’Hehir and Ó Muircheartaigh, but he had a distinctive style, less discursive than his contemporaries but sufficiently well thought of to take over as the lead commentator in the summer of 1968 when O’Hehir was indisposed on health grounds.

One recurrent byline is happily still with us and, like McGee, still writing, ie Paddy Hickey, who on the front page warned that Croke Park were considering “self-imposed austerity” and the reduction of grants because of a projected decline in revenues.

Another is John O’Grady, the former Tipperary goalkeeper, who for years wrote as ‘Culbaire’ in the Tipperary Star.

An aspect of the coverage that jumps out is the continuing intercounty season – in contrast with the modern moratorium on anything apart from club schedules.

Among the matches on in that early autumn was a strange ‘Hurling World Cup’ encounter in Wexford Park between the home side, recently crowned All-Ireland champions, and New York.

In a sceptical piece, Liam Campbell, writing about the home side’s 1-17 to 3-5 victory concluded laconically: “So Wexford are the best hurlers in the world.”

There’s a familiar face on page five: former Tyrone manager Art McRory, who took the county to its first two All-Ireland finals in 1986 and ’95, having previously guided Tyrone to All-Ireland success in the vocational schools championship. In 1968 he had just captained them to the junior All-Ireland.

It was a big deal for Tyrone at the time, the county’s first adult championship. McRory now recalls that a happy county board sent the team to the US in celebration where they stayed in Philadelphia and played New York in Gaelic Park. New York were a more prominent presence in those days, getting to contest the league final against the ‘home’ winners.

“It was a bit of an embarrassment for them that we were leading late in the game,” he says. “The clock suddenly stopped and it wasn’t starting again until they got the lead back!”

Twenty-eight years-old that year, he was graded junior because of the rule that players couldn’t have played senior the previous year, which he hadn’t as he was injured.

A demanding All-Ireland run saw Tyrone beat Kerry in the semi-finals and in the ‘home’ final Mayo were leading by 10 at half-time but in a startling second-half turnaround – “we stopped their midfielders running through us,” he recalls with an air of finality – and as the margin was whittled away, McRory himself took care of the rest with two late ‘50s’ to ensure victory by a point.

London were well beaten in the All-Ireland final. It proved a harbinger of what was to come. McRory himself was back playing senior a year later and the junior success would be a fair influence on the 1973 team, which won the Ulster senior title, only the county’s third after the back-to-back titles of 1956-57.

Jody O’Neill managed the team as he had the 1968 juniors and a number of the players stepped up although McRory had retired by then.

It rounded off a good year for Ulster as Down had taken the Sam Maguire north a few weeks previously – although no team from the province would again do so for another 23 years when Down ended the famine.

If 50 years doesn’t appear a massive jump – especially to those who can remember 1968 – the historical reach is striking. Rewind 50 years from 1968 and you’re back in 1918 when Wexford became the first county to win four-in-a-row All-Irelands.

Raymond Smith recalls in his piece on Kerry football that he had spoken to Dinny Breen, by then the only survivor of the team that won the 1903 All-Ireland, Kerry’s first.

Finally, as the GAA gets ready to consider trialling football rules designed to make the game more engaging, it’s interesting that in October 1968 Brian Geraghty wrote about the relative merits of the modern ‘precision game’ as opposed to traditional catch and kick.

“The teams which played this new game were usually composed of a number of lightning fast small fellows who appeared to spend half their time up somewhere in the Hogan Stand and the other half darting all over the place collecting passes, never marking their men and punching goals and points from somewhere underneath their opponents’ legs. Never do these Leprechauns kick the ball up in the air – and “for God’s sake would someone tell them to stop running for a second until we get a look at them and see are they Irishmen at all”.

That would be one vote for the attacking mark.