Seán Moran: Waterford roll the dice in most significant league for 20 years

All managers have one eye on the new championship format – so who’ll get it right? 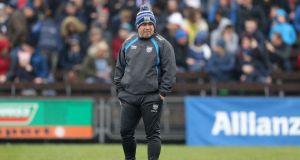 Waterford Manager Derek McGrath said his side’s next league game (against Cork) wasn’t a “must-win” but that he wanted to see them produced a performance. Photograph: Bryan Keane/Inpho

This week, even though the merest suggestion of spring has just emerged, the hurling league’s regulation season has already passed the half-way mark. It is the most significant season in the game since the adoption of a calendar-year league in 1997.

That significance may be based on the new championship structures, which are hammering down the track in less than three months but it’s been absorbing to look at how the counties have been preparing themselves for what they believe will be the demands of the provincial round-robin series in May and June.

The league itself remains fairly hard-wired into championship prospects with a steady 50 per cent of winners over the past two decades adding the All-Ireland as Galway did last year but this season’s pathways are uncharted.

Ultimately though the challenge is uniform for all 10 counties: to equip themselves with a panel to play a high-tempo schedule while maintaining competitiveness.

Waterford have been the most radical in that their preparations clearly lag behind their peers, as can be seen from their bottom of the table status and failure to win a point to date.

Derek McGrath in his own way sounded a faint alarm after losing emphatically to Kilkenny when pointing out that he and the team had targeted a performance in this match against their neighbours, who have consistently provided the Waterford manager with bench marks in the past two seasons: first league win in seven years, first win in Nowlan Park in 13, followed last summer with a first championship success since 1959.

Deepening the attacking pool is, you’d imagine, a priority, as in the run to last year’s All-Ireland final, the team was disproportionately dependent on scores from centrefield

After winning the league in 2015 and reaching the following year’s final, McGrath stepped back from the competition last year to pace the team’s preparation a bit differently but with the proviso that it shouldn’t impinge on the team’s attitude to training and matches.

Again on Sunday he was at pains to nail any notion that Waterford were being “too smart in terms of preparation” but he also said that for most of his tenure he has been depending on about a dozen core players, who line out all of the time – for instance in the 2015 league success and run to an All-Ireland semi-final there was only one change in the defence in 12 matches.

Against Antrim in the league Kevin Moran dropped back in the absence of Austin Gleeson, who together with Shane Fives, Barry Coughlan, Noel Connors, Tadhg de Búrca and Philip Mahony constituted the back six (not counting sweeper) in the other 11 line-ups.

Steps have been taken to address the lack of depth. There are Hollywood blockbusters that haven’t auditioned as furiously and Waterford have started 28 different players in three matches.

McGrath deflected a question about the upcoming match against Cork being “must win” by saying that his team had to get a performance. In any event there are no “must win” matches in the league until the relegation play-off at the end of the divisional fixtures. Cork lost all of their regulation matches two years ago, only to send Galway down in the play-off with a late goal. Waterford have another couple of weeks before their season comes down to that and besides, you could argue, Galway haven’t looked back since taking the tumble.

It also remains to be seen whether there will be any move to vary the highly structured tactics of the McGrath era, which continue to divide opinion inside and outside the county. The manager could argue that when he lined the team out in conventional fashion in last year’s Munster semi-final against Cork, the outcome was not encouraging.

Looked at another way, however, Waterford had a three-month wait for that first championship match and looked flat-footed compared to a Cork side who had had the benefit of a quarter-final in May and with it a great launch-pad of a win over then All-Ireland champions Tipperary.

This coming May, everyone’s on more or less the same starting line with five matches in six weeks and so that won’t be a factor.

Deepening the attacking pool is, you’d imagine, a priority, as in the run to last year’s All-Ireland final, the team was disproportionately dependent on scores from centrefield supplied by Kevin Moran and Jamie Barron.

Three years ago, Shane Bennett and Patrick Curran were ascendant stars but the latter had a very difficult season last year and will hope to turn his exceptional Fitzgibbon Cup form with DCU into a platform for re-launch and the former, although McGrath hopes to have him back at some stage, walked away from the county scene at the start of the year.

Enhancing Waterford’s options makes getting the above pair back on the road to their best form imperative.

That’s just one story so far. There are others. Tipperary manager Michael Ryan is watching Jason Forde making the best of Séamus Callanan’s and John O’Dwyer’s absences in recreating his devastating UL partnership with John McGrath.

Wexford are being feisty and Kilkenny as hard working as ever even if the band line-up is changing, whereas Clare have got out front with some exhilarating, if flawed, performances and Cork under new management are single-mindedly road-testing.

We may not be quite sure where it’s all leading at the moment but finding out will be interesting.