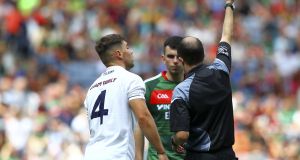 Proposed changes to the black card sanction would mean a player just has to sit out the action for ten minutes. Photograph: Ken Sutton/Inpho

You might imagine that GAA administrators shifted uneasily at the widespread condemnation that followed the shenanigans in Las Vegas at the weekend. All that violence spilling from the arena into the crowd and vice versa? The general air of lawlessness and indiscipline?

It would be one thing were some of the scenes from club football matches in Ulster, so freely available on social media, part of a promotional push in pursuit of even bigger paydays for the organisers but instead they are evidence of the dedicated amateurism of the Gael, willing to put on a bloodthirsty show for the love of it rather than any material reward.

Former Armagh All-Ireland winner and Ireland captain Steven McDonnell, who still plays club football, even went as far as to cite UFC as in influence on the aggression on display in football matches. Unfortunately it has a longer history than that but the same rules as ever still apply.

If unacceptable conduct sufficiently disadvantages those responsible, it stops. There’s nothing mystical about ‘cultures’. If the penalty bites, indiscipline becomes a liability and behaviour changes.

How that equilibrium is reached is another day’s work. For reputational reasons the GAA needs to have powers of intervention in these circumstances. County boards should be under an obligation to provide Croke Park with details of what has been done to investigate such incidents and what remedies have been applied.

There has long been an argument for a full-time discipline commissioner in the association. The relevant committees are too dependent on the calibre of their members and their willingness to take hard decisions.

It’s not for nothing that the unofficial advice from full-time officials to incoming presidents is to put the best people you can find on the disciplinary bodies.

Despite this, in the grace-and-favour world of appointments to national committees the necessary resolve can be hard to find and even then, vulnerable to being undermined by external pressures.

With all that in mind, it was puzzling to see the trial proposals on discipline from the Football Standing Committee on the Playing Rules, specifically the suggestion that the current black card sanction of immediate replacement for the offending player be swapped for 10 minutes in the sin bin.

In a fixed-position game like rugby, the advantage to be gained from having an extra player is easier to work through, as the opposition have to be behind the ball and the relevant mismatch can be engineered (although this is offset by more frequent stoppages, which run down the clock).

Football and hurling often produce matches where the outnumbered team wins, even at elite level. The notion that being reduced to 14 men for 10 minutes can impact on a contest is debatable.

More problematically, it makes it easier for the player who commits the infraction. At present, someone deemed to have a committed a cynical or calculated foul has to leave the field even though he can be replaced.

Under the new proposal, he must sit out 10 minutes on the bench but as things stand, he faces the rest of the match on the sideline.

Contrary to much speculation in advance of its introduction, the black card has resulted in few instances of ‘taking one for the team’ except perhaps in the closing minutes of a match, which is admittedly a problem but not one particularly addressed by the sin bin.

That is simply because players are selfish to the extent that they don’t want to have to leave the field and be replaced by another player, who may seize the opportunity and impress in the absence of a dismissed team-mate. Being allowed re-enter proceedings after 10 minutes would be altogether more appealing.

Whatever about the sanction for a black card being changed, and in this view diminished, to reduce the impact of two yellow cards, which after all are in effect a red, to a similar 10 minutes in the sin bin would represent a softening of on-field discipline, which is hard to justify.

Rugby also raised issues about some of the committee’s other proposals, specifically those intended to tackle concerns about football. When you see a referee in rugby calling in a TMO to adjudicate on a potential offside leading up a possible try, it can take forever to view the action from a couple of angles – and that’s in a game with a gain-line.

Given the positional requirements of a number of the proposed football measures – players at point A and the kicker at point B; restrictions on the numbers allowed in specific pitch locations at various times – the image occurs of big matches and scores dependent on positioning all taking place in what would be a split second’s arbitration for the referee.

It would be like a rugby official having to make a call on a passage of play without assistance before having the TMO run the angles after the decision is made – which is just what television pundits will be doing on the night in question.

It adds force to Paul Earley’s advocacy of a second referee in football but that would, like Hawk-Eye be realistically available for only inter-county matches given the difficulties of sourcing referees even at the top level.

It is not unreasonable to want elite contests to have the best decision-making processes available but for the GAA it would be another step along the widening boundary that separates the inter-county game from the clubs and it’s not the best time to be widening that gap bearing in mind the struggles to rebalance the scheduling disparities between the two.

1 Jim McGuinness: There is a way to save championship and make it competitive
2 Once in a blue moon: Cavan’s overnight success 15 years in the making
3 Autumn Nations Cup - Ireland v Georgia: TV details, kick-off time, team news and more
4 Ireland’s clash against Georgia will be an important audition
5 Sordid murder of hurling brothers still resonates in south Galway
Real news has value SUBSCRIBE