Seán Moran: Too early to leap to judgement over Super Eights 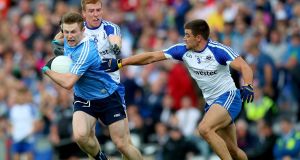 One of the benefits of the new format would see Dublin getting out of Croke Park for at least one game in the Super Eights. Photograph: James Crombie/Inpho

It hardly took the least competitive set of quarter-finals in history to draw attention to the widening gap between All-Ireland football contenders. That process has been under way for a while now.

There has been much unhappy comment about the statistic showing a cumulative margin of 58 points between the winners and losers of this year’s last eight. Even if Monday’s turkey shoot was a replay – the first in 11 years – people can be forgiven for concentrating on the bottom line.

Bad and all as it was it was just part of a trend. Taking the cumulative winning margin as a metric of competitiveness, we see that the nine most one-sided sets of quarter-finals have come in the past 10 years.

Intensifying the angst at the moment is the GAA’s decision to embrace for a three-year trial period a round-robin format for the last eight teams in the football championship, conjuring the spectre of the vast disparities we’ve seen over the past two weekends taking place in triplicate next summer.

As a preliminary point it seems odd to use the failings of the quarter-finals as a stick to beat a proposed change. One of the reasons for lop-sided matches is that weaker teams can find the whole, sudden-death aspect of the occasion intimidating and having to play in Croke Park before frequently large crowds adds to that sense of anxiety.

Six of this year’s quarter-finalists played in Division One during the spring and although Roscommon were relegated and endured a mauling from Dublin – Monday wasn’t even their first 20-plus beating of the year in Croke Park – their other performances were a lot more competitive. In other words, when playing week in and week out there wasn’t such a gap.

It is safe to assume the Roscommon players wouldn’t have minded the opportunity to play again next week if only to put the replay in the rear-view mirror. Of course had the new format been operative they wouldn’t have had to face Mayo again, as they’d have been allowed share the spoils of the drawn match.

What has happened over the past few days is that every criticism of the new championship format has been given a further airing even though few are in any way convincing.

For instance the idea that the change is ‘elitist’ is an incomprehensible one to make about the concluding stages of one of the country’s more famous sporting competitions. What else would it be but elitist? Its purpose is to determine the best team in the championship.

There is the more nuanced argument advanced by amongst others Monaghan manager Malachy O’Rourke that the system will benefit the elite by perpetuating it.

The four semi-finalists this month support the claim. All of them are in the top five counties based on semi-final appearances in the qualifier era. Cork with eight are the ones missing.

Mayo are in their seventh straight semi-final, ninth if you count replays, whereas Tyrone – proven minimalists in their reluctance to reach the last four unless they’re going to win the title – have seven appearances. Dublin have been in the last eight whereas Kerry have missed out in only two of the 17 years.

So, yes, there has been a self-perpetuating element but why is that? Presumably because teams getting more exposure to big matches become better and better. This is precisely one of the arguments in favour of the proposal advanced in the Croke Park blueprint.

It would surely have been invaluable in developmental terms, for a county such as Clare, which came through the qualifiers to the All-Ireland quarter-final this year (2016), to have had the opportunity to play three games rather than one at the last-eight stage, one of which would have been in Cusack Park in Ennis. Dublin or Donegal travelling to play Clare in front of 14,000 spectators packed into Cusack Park would have brought Clare on as a team and would have been a fantastic occasion for players and supporters alike.

The parallel criticism is that this opportunity could result in the ladder being pulled up after the top eight counties but that flies in the face of the experience of 17 years of qualifiers. During that time 24 counties have qualified for the quarter-finals, making it hardly an exclusive club.

Finally on elitism, the question is what on earth is to be expected from a competition in an amateur sport – with its concomitant restrictions on freedom of movement – that pitches units with enormously varying populations in against each other?

The GAA’s history is testimony to this: two counties have won more or less half of the football titles between them whereas in hurling three counties account for nearly three-quarters.

Since 2001 the prospects for counties have been transformed by the expansion of the championship and the dilution of the strictly knock-out format. Only this season Carlow had their best summer run since the 1940s. They may have benefited from the draw but the draw also paired them with Dublin in Leinster and they acquitted themselves honourably.

There are valid reservations about the experimental format but they relate to the public more than to the teams. Followers of Gaelic games just don’t like group formats. That’s why attendances at league matches are far smaller than at championship. There is far more enthusiasm for sudden death and matches as collisions with no survivors.

Supporters of counties aren’t always the most committed of sports fans and they have absolutely no interest in dead rubbers – the abundant threat of which has been extrapolated from the quarter-final results.

It can’t be said with certainty that these concerns won’t materialise but given the potential improvements on the status quo – getting Dublin out of Croke Park for at least one match, ensuring that teams have a few opportunities to test themselves rather having a season terminated after getting devoured – let’s not leap to judgement before a ball is kicked in the trial format.