Seán Moran: The magic has gone from international rules 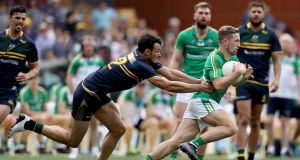 Ireland’s Niall Sludden with Robbie Tarrant of Australia during the first Test in Adelaide. The discipline was genuinely impressive in the game. Photograph: Tommy Dickson/Inpho

Seven years we have lived quietly,

‘Murder in the Cathedral’ – TS Eliot

International rules returned to Dublin in 2010, four years after the events that all but killed it off. No-one disputes that the high point of the series came shortly before the throw-in to the second Test in 2006.

Having kept the show on the road after the aggravated violence of 2005, those in charge of the game had glimpsed a decent contest in Galway, won in a late flourish by Ireland.

So it was once again competitive and had been hard but well behaved and now, on Sunday, November 5th 11 years ago, 82,127 people turned up to watch the second Test. The eruption of more outrage, punching, kicking, head-butting – all means of combat according to cultural preference – was cartoonish and fatal.

An underestimated series in 2008 got things rolling again. It was lively and competitive but tentative and anxious because if anything had gone wrong, the whole project was done.

But Ireland was the touchstone. That’s where the crowds came out. So in 2010 the Australians sent a decent team and beat Ireland but the crowds, while respectable (aggregate 91,959) were the lowest for more than a decade.

It was as if the spell had been broken. The desire for good behaviour, which after all is just a way of competing within the rules, was felt to have tranquillised the visceral excitement of the contests, the sense that anything could happen.

There have been good contests since but too much of the discussion around internationals has become about its existence rather than the play, the interaction and the tactical jousting between two games with something in common but not everything.

Sunday in Adelaide wasn’t bad. Saturday estimates that the crowd would be between 20,000 and 25,000 were slightly exceeded but if Perth comes in at the usual late 30,000’s the aggregate will still be the second lowest in Australia since the Tests resumed 20 years ago.

It has been interesting to see the Australian media grappling with the eternal mysteries of the series. No more than anyone else they can get exasperated by coming to terms with the game, which in recent years has been reduced to an occasional sighting rather like a comet, regular in its habits but with declining frequency.

The view from the other side of the world so far has tended to be negative. Lack of familiarity with the game, which even at its zenith was only being staged twice a year, has been exacerbated with the two recent ‘one-Test’ series, which meant that on Sunday international rules was being seen – glimpsed – for only the third time in four years.

Whereas in the past the objections were more theoretical – it wasn’t AFL so what was the point of it all? – what has been detectable this time around is an awareness that something has been lost. In other words it used to be vibrant but no longer is.

Hard to argue with that but when it was vibrant the Australians, succumbing to disastrous Gothic temptations, undermined it.

Again, like a spell being broken, what had been free-wheeling and exciting became regulated and hesitant – signs of relief attending its every staging where mayhem didn’t break out – and the crowds noticed the inhibition.

On the face of it, much is positive. Sunday was a good game. Ireland, capriciously handicapped by illness, fought the good fight but couldn’t survive 20 arid minutes in which time they scored three points even though they recovered a little by the end.

The discipline was genuinely impressive. There were flashpoints: Aidan O’Shea and Zach Tuohy got into spats with respectively, Nat Fyfe and Travis Boak, but whereas in the past there would have been a few willing to fan the flames, on Sunday order was restored before things got out of hand.

Six years ago then Ireland manager Anthony Tohill said that there were two things the series couldn’t survive: lack of discipline and competitiveness.

Ironically those issues would appear to have been addressed. Unless there is a blow-out either in behaviour or on the scoreboard – something that Ireland must beware with the residue of illness and Pearce Hanley’s absence – this Saturday, we may well have witnessed a model series with skills on view, uninterrupted by indiscipline, and a genuine contest.

Furthermore the Australians have been taking the whole event very seriously. GAA Director General Páraic Duffy is convinced that the AFL want to continue and they tell him that the top players are committed to the series, as they undoubtedly were this year.

Why then is there still the conditionality around it in Australia and the media rush to speculate that a couple of injuries may break the resolve of clubs to allow their players take part and so doom the series?

The answer is familiar from marital difficulties where bad behaviour led to a near breakdown. The parties are back together, genuinely doing their best, and consciously being on their best behaviour. Yet there is something forced and mechanical about it as well as the breathing apprehension that a whole array of things that might go wrong could end it all, this time for good.

The magic somehow is sadly gone.