A busy weekend sees 11 finals in football and hurling 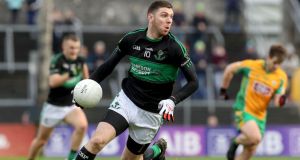 Luke Connolly has been in high-scoring form for Nemo Rangers ahead of their Cork SFC semi-final against Duhallow on Sunday. Photograph: Bryan Keane/Inpho

Kildare SFC final: Athy v Moorefield, Newbridge, 4.30
It’s all of nine years since Athy became the last club to interrupt the Newbridge duopoly but thanks to Niall Kelly’s clinical finishing, they evicted Sarsfields in the semi-finals. Moorefield showed greater composure in the controversial other semi and will be expected to make their experience count here.

Cork SFC semi-finals (at Páirc Uí Rinn): Nemo Rangers v Duhallow, 2.0; Castlehaven v St Finbarrs, 7.0
Nemo, with Luke Connolly in high-scoring form, eventually subdued an energetic Ballincollig and should reach the final where they are likely to be joined by Castlehaven whose opponents St Finbarr’s won their delayed quarter-final only three days ago.

Cork SHC final: Blackrock v Glen Rovers, Páirc Uí Chaoimh, 4.0 – Live, TG4
A reunion of the county’s top two clubs in a Cork final for the first time in 42 years. The Glen have looked impressive, with Patrick Horgan his usual prolific self, as they try to regain the title they held in the middle of the last decade. Blackrock are slightly more surprising finalists but their high-scoring defeat of UCC – who beat the Imokilly side, who have dominated recent championships – in the semi-finals stated their credentials and their rejuvenated team have a shot at this although still outsiders.

Derry SFC final: Magherafelt v Slaughtneil, Celtic Park, 4.30
Champions Magherafelt are back to take on the serial winners of a few years ago. Rested, revived and well suited by the unusual circumstances of this year, Slaughtneil looked excellent in the semi-final albeit against an underwhelming Ballinderry and are favourites but the champions will be a lot more formidable.

Galway SFC final: Mountbellew-Moylough v Moycullen, Pearse Stadium, 4.0
The biggest head to roll in the county championships so far has been three-in-a-row All-Ireland champions Corofin, who were finally sent packing by Mounbellew-Moylough last week. Val Daly’s side are looking to capture a title for the first time since 1986. Moycullen have yet to win their first but were big winners when the clubs met in the group stages. It’s a bit different now but wielding the knife isn’t always followed by lifting the crown.

Galway SHC final: St Thomas’ v Turloughmore, Kenny Park, 2.0
This is the final most neutrals had been hoping to see and once St Thomas’ had edged out the perennially misfortunate Cappataggle, it materialised. Turloughmore, with Daithí Burke in top form, have a genuine chance here with their pace and movement but the champions are on three-in-a-row, an achievement previously the preserve of serial All-Ireland winners Portumna and Athenry, and can take it.

Limerick SFC final: Adare v Ballylanders, Gaelic Grounds, 2.0 Adare have won two of the last three county titles, including beating this weekend’s opponents in 2018, an outcome they can repeat.

Meath SFC final: Gaeil Colmcille v Ratoath, Páirc Tailteann, 2.15 – Live TG4
Champions Ratoath will be hoping to repeat last year’s semi-final success when they out-manoeuvred their opponents but Gaeil Colmcille have been around for the past half-decade and have at last reached the final. An edge in defence can tilt it for the holders.

Offaly SFC final: Rhode v Tullamore, O’Connor Park, 4.0
Nine finals in a row for Rhode but the underdogs from Tullamore eliminated champions Ferbane in a nail-biter of a semi-final on penalties. Rhode are heavily favoured and although it should be closer than odds suggest, they can make it an 11th title in 17 years.

Westmeath SHC final: Castletown-Geoghegan v Clonkill, TEG Cusack Park, 4.0
Evenly balanced with Clonkill on the cusp of a third successive title against opponents who won three years ago and have the bit between their teeth.