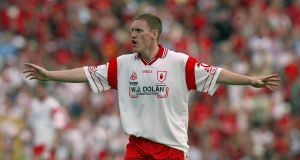 Cormac McAnallen: moved from centrefield to full back after the drawn Ulster final of 2003. Tyrone went on to win their first All-Ireland title. Photograph: Andrew Paton/Inpho

It is ironic that all of the fuss caused by Stephen Rochford’s decision to send Aidan O’Shea to patrol the square was triggered by Kieran Donaghy, a player whose inter-county career was founded on having been turned into a full forward all of 11 years ago.

The idea had floated around Kerry where Donaghy’s club performances at 14 had caught the eye but by the time the county had lost the replayed Munster final in 2006, manager Jack O’Connor reckoned he needed a target man to provide a service for Colm Cooper and Michael Francis Russell in the corners.

In one of those random events that assists serendipity, Donaghy – until then an earnest centrefielder – had to serve a suspension after the drawn match with Cork and in his absence Tommy Griffin partnered up successfully with Darragh Ó Sé. As a result there’d be no issue around the middle if the full-forward experiment worked.

It did. During four matches in the Munster championship, Kerry scored no goals. In the four afterwards they scored 11 with Donaghy at full forward in all of them, starting with the qualifier against Longford during which he scored a point but directly set up 4-1 as well as getting fouled for a penalty that wasn’t converted.

Kerry have come up with a fair few examples over the years. In 2009 All-Ireland-winning All Star full back Mike McCarthy came out of retirement after three years to play centre back –and only in July after the qualifiers had begun.

Memorable amongst other things for his flying contribution to the Colm Cooper goal in the quarter-final, which after 40 seconds caused Dublin to disintegrate, his season finished with another All-Ireland.

That is the hallmark of inspired tactical adjustments: they tend to work immediately.

To be fair to Rochford it’s a results-driven process. If Mayo had lost he’d have been blamed but to say they would have won with O’Shea elsewhere is as hypothetical as the argument that Kerry would have hacked up under high ball had he not been deployed as a deterrent.

Mayo will be judged on the replay.

The idea of unexpected tactical changes is a common one in football and they don’t always work but when they do, they can play a key role in winning All-Irelands.

The O’Shea gambit is one of a type whereby a player’s established strength is traded in for what is seen as an even greater benefit. The use of Lee Keegan as a man marker for instance can greatly inhibit a key player on the opposition team: Enda Smith and Diarmuid Connolly for instance, but it can also defuse the threat he poses, as has happened in matches against Dublin and the second half of the drawn Roscommon match last month.

Dublin sprang a surprise 23 years ago in the All-Ireland final when moving their best player Paul Curran out of wing back so that he could mark Down’s most dangerous forward, Mickey Linden. It went badly and later, manager Pat O’Neill said that on reflection it had been a bad idea to take one of the team’s strengths and undermine it in a speculative attempt to cope with the opposition.

As it happened the decision to switch centrefielder Paul Clarke into the corner worked better and a year later when the All-Ireland title was eventually won, a comparable fix – moving another centrefielder, Brian Stynes to mark Tyrone’s Mattie McGleenan – proved crucial in the outcome.

In-match tactical adjustment is a premium expertise and arguably the best at it is Mickey Harte. Topically enough after last Sunday, he successfully redeployed a centrefielder to full back by moving the late Cormac McAnallen from the middle to the square after the drawn Ulster final in 2003 when Tyrone had been pillaged for four goals.

That worked so well that the county’s first All-Ireland was won but it was his half-time changes two years later that effectively secured the second. Trailing by five against Dublin in the quarter-final, Harte moved Conor Gormley to centre back and completely changed his centrefield, bringing out Enda McGinley and adding Joe McMahon – who would also be successfully moved to full back in subsequent matches – from the bench.

The changes were crucial to the All-Ireland-winning campaign that year.

All-Ireland champions have on more than one occasion rejuvenated their challenge by switching players around. Down’s 1991 team flagged over the next two years, getting beaten by Derry both seasons but when they faced the same opponents for a third summer in 1994, manager Peter McGrath shuffled the deck, bringing full back Conor Deegan to centrefield, moving Barry Breen in the other direction to centre back and dropping James McCartan deeper to wing forward.

They won the All-Ireland – but it had taken three years.

The advent of the qualifiers has enabled teams to make running repairs and use the lessons of defeat a fortnight rather than a year later. When Galway won the first All-Ireland of the new era, it was also three years after their previous win but the catalyst was defeat by Roscommon in the Connacht championship.

Tomás Mannion went from corner back to centre back, Michael Donnellan from the forwards to centrefield. In the above cases there have also been new players added to the mix but the revival of established players was key to rehabilitation.

This facility of reinvention has been a feature of the qualifier era. Of the 16 championships, six have been won by teams rediscovering the winning formula after being beaten. Of the other 10 champions, it may be significant that six were taken to replays along the way and had to respond to that setback.

Teams need to be careful, though. As Mayo found out, re-creationism can sometimes be a myth.