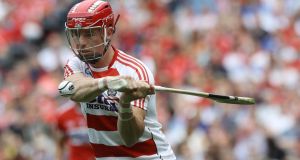 Anthony Nash looked to play for both Cork and Kanturk in the space of a few hours. Photograph: Lorraine O’Sullivan/Inpho

Anthony Nash’s predicament spoke volumes. There were eyebrows raised when the Cork goalkeeper was named in the team to face Kilkenny on Saturday night, scheduled for just hours after his club Kanturk’s All-Ireland semi-final against Middletown.

Nash later clarified the situation: he wanted to play for Cork but was gently ushered to the replacements bench to allow Patrick Collins take over for the opening league match.

It was entirely understandable on the player’s part. This was going to be Cork’s first competitive fixture in the new Páirc Uí Chaoimh and the visitors were Kilkenny, who they hadn’t beaten in the league since before Nash’s career took off. On top of that, were it not for the weather there wouldn’t even have been a clash of fixtures.

There is however a difference between an established player, who genuinely wants in a unique situation to play two matches in a day and the relentless pressure on younger footballers and hurlers at this time of the year.

Anyway, it has long been accepted that club players with All-Ireland commitments will not be called on by their counties until their championship run has ended. This is as it should be but not all competing activities are treated with the same respect.

Already the focus on third-level competitions, primarily the Fitzgibbon and Sigerson, reveals deep unhappiness at the virtual withdrawal of so many county players from meaningful involvement with their colleges.

This is a vulnerable constituency, populated by many aspiring county players, who will be reluctant to defy the wishes of any manager requiring their nearly exclusive attention at this busy time of the year.

It was because of this multi-eligibility that the age group was identified as that most vulnerable to the dangers of burnout when the issue was first seriously investigated by the GAA more than 10 years ago.

Since then demands at county level have intensified. Professor Niall Moyna, who has coached DCU’s Sigerson teams since the early 2000s and leads the college’s School of Health and Human Performance, made that clear this week. He suggested that some of the programmes for players were inappropriate and self-defeating.

“If you’re not an elite athlete and don’t have time in the afternoon to go to bed and get your rehab and nutrition, there’s a law of diminishing returns and we’re now well past that.”

In other words it’s a professional template for amateur players.

Roscommon footballer Cathal Cregg is the Connacht Council’s Head Strength and Conditioning Officer. Three years ago he made a presentation to the annual games development conference, highlighting from research he had done the dangers of too much training and too little rest. One of the most striking things to emerge from the address was that the profile of muscle injuries in Gaelic games was far higher than in other sports.

There has been some progress in the past three years The recasting of the under-21 football championship, previously played in the spring, as an under-20 and purely developmental grade has removed another competition that used to complicate lives.

In relation to Cregg’s point about the scale of muscle injuries, there is some emerging evidence that the introduction of the GAA15 warm-up routine has reduced the incidence of these.

GAA15 was devised as a collaborative project, involving amongst others the GAA Medical, Scientific and Welfare committee, and based on a literature review directed by Dr Catherine Blake of UCD.

IT Carlow post-graduate students Seán Kelly and Paul Miley conducted a survey of the effect of the warm-up on teenage hurlers over a two-year period and the findings indicated a 45 per cent reduction in lower-extremity training injuries. The hope is to roll out the programme on a global basis.

Cregg was also of the view that the same players shouldn’t be involved with both Sigerson/Fitzgibbon and county. A desire to thin the eligibility of players has also been expressed by others. Waterford hurling manager Derek McGrath, currently juggling a sizeable group of Fitzgibbon players in the weekly league schedules, is on the record as saying that these players should be left with their colleges for the few weeks they are involved.

It would help – as well as recognise that college is home to many of these players – were a compromise introduced that allowed counties select the players in question but insisted that they train with their college.

For most of those affected – and especially those living away from home for what generally is the first time – college is their life for a brief few years. Their friends are there and they will experience a greater sense of ownership of the college club because they run it themselves. It should be the time of their lives and not a box to be ticked to secure a scholarship while they beat a relentless track to and from county training.

The experience produces players and administrators of the future and should be prioritised if the GAA wants to continue to benefit to the extent that it always has from this brief but lasting involvement.

Few third-level coaches are optimistic that there will be any intervention to strengthen their hand in the current conflict. The view is that the Sigerson and Fitzgibbon are being devalued by the disappearing access to players.

Not all county managers are unreasonable about this access and they are also under pressure from the crash-bang scheduling of the leagues but the clear long-term benefit for young players is that they shouldn’t have to serve two masters. Demarcation lines for a few weeks would go a long way to sorting out the problem.