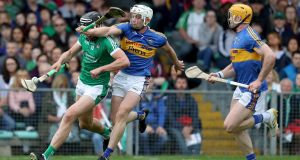 An interesting point was made about Sunday’s Limerick-Tipperary match in the Gaelic Grounds; if the teams had played in differently coloured jerseys, you’d never have guessed which was which.

This was a reference to the traditional atmosphere in Limerick, especially when Tipp visit, with its volume levels rising at the slightest encouragement and the green mist descending on increasingly combative players. Nicky English has often expressed the view that no crowd takes to the fray as influentially as the home support on the Ennis Road.

Yet there was something different about last weekend. The atmosphere was slightly muted, as if the spectators weren’t quite sure what they were watching. Yes, it was a first round match in Munster’s hurling championship but for the first time defeat was not going to spell the end of the campaign after one match.

There would also be the next three rounds played in quick succession; don’t get too excited because you’re back on pretty quickly. Limerick have a week off but Tipperary, smarting from losing their first match, will now be hosting Cork.

No wonder the craziness levels were lower than would normally greet a championship victory over the neighbours.

The substance of the observation though was that watching the teams hurl wouldn’t have given many clues as to the respective identities. Tipperary were the team engaging in the hit-and-hope in an effort to exploit the menace in their full-forward line; Limerick were stringing the moves together and looking up to assess measured ball into a lively attack.

When the time came to hit the pedals, the telling scores came not from speculative belts of the sliotar being carried over the bar, apparently by gusting roars from the home support, but persistent attacking plays and a very calmly-taken goal.

Reaction afterwards was all about process and even as Limerick manager John Kiely outlined the importance of the win – the county’s first in three championships – he was emphasising as much.

“Three more games to go in this round-robin series so it’s heads down and get ready for training on Tuesday night. It’s all about recovery now for the next 48 hours. It’s great to win but it’s only game one of four. There’s no getting carried away.”

It was all a bit removed from the aftermath of one the three matches in the 2007 epic when a delirious Richie Bennis invaded a television interview with his opposite number Babs Keating to celebrate what a great game hurling was.

Sunday was nothing like as excitable for one simple reason: Limerick no longer need to pull performances out of nowhere. They have a good panel of players, accustomed to winning at underage and in the Fitzgibbon Cup and what they need is to play to their strengths, which is what happened at the weekend.

All year they’ve been patiently posting good performances. Even their exit from the league at the semi-final stage in Thurles was marked by a refusal to give up or become discouraged by the barrage of inaccuracies they were hitting and it took Tipperary until extra-time to shake them off.

This time around the talk was more of Tipp’s selection, which had partly arisen from the pile of injuries that Michael Ryan was dealing with but also from the consequences of a dire league final defeat. On The Sunday Game Eddie Brennan pointed out that compared with their All-Ireland winning side of two years ago, Tipperary had no one in the same central positions.

There was a new goalkeeper and full-back. Pádraic Maher was at centre-back with his brother Ronan on the wing – rather than the other way around, which has consistently been the former’s optimal placing – debutants at centrefield and Noel McGrath and Jason Forde down the spine of the attack.

It was high-stakes stuff against a team that had served notice, when beating All-Ireland champions Galway to promotion from Division 1B, of its determination to do what might be considered un-Limerick like things.

In the event Tipp’s tweaking didn’t work that well. Brian Hogan had been brought in as goalkeeper because of misgivings about the number of puck-outs lost in the league final against Kilkenny and yet – and this wasn’t all the keeper’s fault – with the match in the balance they only won two of the last 11 restarts – nearly twice what their opponents lost in the entire match.

The first half was marked by fixable issues for Limerick, who trailed by a point: better discipline to reduce the 0-7 handed to Jason Forde’s impeccable free taking and more assured shooting (not guaranteed in a year of big scores amid plenty of misses).

Goals kept Tipp afloat but the tide was with Limerick. Even the visitors’ impressive looking replacements’ bench came out second best, as none of the former All Stars – Brendan Maher, Séamus Callanan and Patrick Maher –looked up to speed after injuries whereas Mike Casey improved Limerick’s defence and Barry Murphy got the decisive goal.

Dismal starts to championship are nothing new to Tipperary but there may be concern in the county at the new format, which obliges them not to strike out on the highways and byways of the old qualifier system with its generally phased challenges but find solutions quickly and get right back into action against champions Cork, buoyant after their first-day win.

The new championship may be in some ways just a change of form rather than substance but its more clinical demands so far look ironically to be more of an advantage to Limerick than Tipperary.