Seán Moran: Limerick could prove to be a different kind of champion 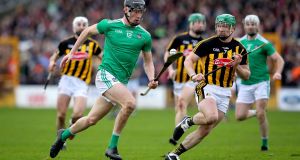 Conor Boylan in action for Limerick against Kilkenny at Nowlan Park. The average age of a young Limerick side augurs well for the county’s future prospects. Photograph: Ryan Byrne/Inpho

Jackie Tyrrell’s comments last week about not seeing Limerick in the top three contenders for this year’s All-Ireland came at an inopportune time – just before they gave Kilkenny an uncomfortable, close-up view of the new world – but they weren’t the flat earth nonsense, suggested by a rush of post-hoc distancing.

It’s possible to disagree with the former Kilkenny captain’s views but at the same time understand the logic of his position.

When made, at the launch of TG4’s new series of Laochra Gael, Tyrrell’s comments weren’t especially inflammatory.

His argument acknowledges that the All-Ireland champions are in good form but questions whether that is necessarily a good thing. To be fair to him, he’s not the only person – the view has also been expressed inside Limerick – wondering whether the team going ‘too well’.

There has already been a fair degree of media focus on Tyrrell’s central point, which is essentially that rip-roaring starts to the following league aren’t unusual for All-Ireland champions but that equally they don’t always lead to further championship success.

It’s now all of 14 years since a county other than Kilkenny successfully defended the Liam MacCarthy Cup, so foreseeing problems down the road for champions is hardly a sensationalist call.

The judgment simply comes down to whether you believe the All-Ireland champions in any given year have reached a destination or are still travelling.

In the past 10 years, counties other than Kilkenny to have won the championship have not retained it and none of them – Tipperary, twice, Clare and Galway (coincidentally the counties name-checked by Tyrrell to be primary  challengers this year) have won the following spring’s league title either.

Galway, champions in 2017, didn’t even secure promotion from Division 1B last year.

Champions have been there or thereabouts, though. In the past 10 years, only two counties could be said to have finished outside of the top three the year after winning the All-Ireland: Clare, beaten in the 2014 qualifiers, and Kilkenny whose championship concluded a year previously in the quarter-finals.

So, the suggestion that Limerick won’t finish in the top three is on one level historically unlikely but times have changed.

The current round-robin format is a significant departure from the old provincial/qualifier system. For a team beaten and/or on a run of poor form it’s a lot harder to get back to the table.

Take Tipperary: defending champions in 2017, they lost the first match in Munster against Cork but then were able to play themselves back into some sort of form, which took them to within a point of their successors Galway in the All-Ireland semi-final.

A year later – allowing that they weren’t champions – a poor result on the first day simply prefaced a run of ultra-competitive fixtures, none of which they managed to win.

It’s not a stretch to say that if Limerick start badly, momentum could easily run against them, especially as they have the disadvantage of being the bye team in round one so their first match could be against a Cork side with the added bounce of having already beaten Tipperary on the opening weekend.

In the list of breakthrough champions Limerick most resemble Clare, whose 2013 victory coincided with a run of four under-21 All-Irelands in six years. The future looked bright but in the meantime has dimmed considerably and even if optimism is creeping back into the county, no-one in the rapturous aftermath of that September evening would have regarded waiting six years, and counting, to get back to an All-Ireland final as anything other than a bitter disappointment.

Without falling into the suckers’ file marked ‘All-Ireland champions with a good start in the league’ it’s possible to be more positive.

Limerick won last August with players of an average age of 23.2. They also had won a couple of under-21 titles but most significantly, colleges in the county have been dominating the Fitzgibbon Cup. Ten of the 2018 All-Ireland starters won medals with UL and Mary I during a sequence that landed the previous four third-level championships.

This year Mary I are back in the final, this time against UCC for whom Paddy O’Loughlin – terrific at wing back for Limerick in the Nowlan Park win – starts. For Kilkenny they replaced six of the All-Ireland winning team, scattered throughout the line-up, and still the motor purred

The Fitzgibbon is the highest standard of competitive hurling outside senior inter-county and it is also tactically influential so to have a double-figure representation of winners on a county team is a serious indication of quality.

In at most six months’ time we’ll all be able to pass judgement on Limerick and how they progressed but an impressive surge through Division 1B last year raised plenty of expectation and that didn’t end in anticlimax.

1 David Clifford sends everyone back to their corners unbeaten
2 Six Nations: Ireland are contenders but England still the team to beat
3 Mike Catt hopes to have Irish backs purring in Six Nations
4 Welcome to Iten in Kenya – home of champions and cheats
5 Owen Doyle: Creeping professionalism of schools rugby a threat to the game
Real news has value SUBSCRIBE