Seán Moran: How the GAA got into a mess over Liam Miller match 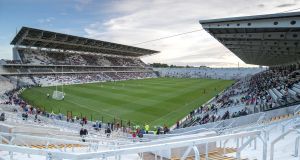 Páirc Uí Chaoimh: controversy erupted over its possible use as a venue for the Liam Miller charity match. Photograph: Oisin Keniry/Inpho

How did it get to this? Literally? The origins of the controversy, which is apparently set to run and run, over the availability of Páirc Uí Chaoimh for a charity event aren’t actually that old.

Given the scale of the rule’s defeat that weekend, it’s hard to work out why such emollience was deemed necessary but that was the reason why the GAA in the decades since has walked into some of its most enervating public controversies, eg the RDS saga back in 1991 as well as this most recent one.

What is most regrettable in the current situation is that it could have been avoided and in fact, could be of benefit to the association. Instead the issue has dragged on to the despair of the most GAA members and amidst the usual barrage of recrimination and name-calling on social media.

There is also the deeply uncomfortable reality that the abuse, agenda grinding and ‘what-about-ery’ rages over a thoroughly commendable project at the heart of which is a grieving family, publicly acknowledged as wanting no part in the fractiousness.

The questions for the GAA in all of this are 1) why they didn’t take advantage of the abundant ambiguity in the Official Guide to green-light the tribute match before the situation got any worse and 2) why if determined not to allow it go ahead, they left the matter open over last weekend and then again after Monday’s meeting with the organisers of the event, intended to raise funds for the family of the late soccer international, Liam Miller?

The genesis of the rule on use of GAA property might go back 47 years but the regulation has evolved quite a bit in the last 15 years or so. In 2005 annual congress voted to open Croke Park for Ireland’s rugby and soccer internationals while Lansdowne Road was being redeveloped.

This access was expanded to allow the Munster-Leinster European Cup semi-final be played at the venue in 2009 and when the new stadium in Ballsbridge was completed the GAA left Croke Park open for other sports.

Attempts to broaden that further to include county grounds were unsuccessful in 2015 and ’16 – well beaten, 23-77, in the latter year, and the first vote falling by 38-62, after an intervention from then GAA director general Páraic Duffy, who pointed out that this would have greater implications for the GAA than the current availability of Croke Park and the co-operation with the IRFU in facilitating the bid for the 2023 RWC.

Despite the rule having always specifically involved the permission of Central Council, the practice developed of declaring the prohibition a matter for congress, which voted to relax it both in relation to Croke Park and the various venues that comprised Ireland’s unsuccessful bid for the Rugby World Cup.

In an unhelpful piece of obfuscation, the relevant Rule 5, under which association property may be not be used for field games, “other than those sanctioned by Central Council,” cites an appendix, listed as a Central Council policy, which is not published in the rule book.

It was drawn up in 2010 and updated four years later and provides, amongst other things, for the hiring out of recreational five-a-side soccer facilities. It states clearly under the heading, ‘Ard Chomhairle policy on use of Full size and Juvenile Size Outdoor Playing pitches (inc. full-size astro turf pitches) controlled by units of the Association:

1.     The GAA does not permit use of its playing facilities by other sporting        bodies or for sporting activities other than those controlled by the                 association itself.

2.     However, Central Council, as enshrined in rule, retains the right to               sanction use of GAA facilities, from time to time, [my italics] for field sports and for such other purposes it considers not to be in conflict with the aims and objectives of the association.

It is hard to see how that wouldn’t confer on Central Council the competence to have made a call in this case, as the tribute match could hardly – even by the most conservative interpretation – be said to be “in conflict with the aims and objectives of the association”.

The traditional abdication of responsibility to congress doesn’t hold up here, as the policy itself, as cited in the appendix, was drawn up by Central Council and not submitted to congress.

Furthermore, the GAA has always embraced reform incrementally. In this case, it has been a matter of Croke Park, first, and then other grounds for the facilitation of the RWC bid.

Establishing a precedent in the current situation for charitable purposes would have added another layer of legitimate use to the interpretation of Rule 5.

It’s worth noting that there are GAA grievances in all of this. With the ban on other sports gone for the past 47 years, it continues to aggravate people in the association that there was little reciprocity, especially in the rugby-playing schools.

The redeveloped Lansdowne Road was originally going to be available for Gaelic games – and how useful that would have been given the current furore over Dublin’s Croke Park residency – but that plan was abruptly dropped.

At this stage though is there not a mood within the GAA to dispense with the paternalistic blanket ban the use of on all grounds outside of Croke Park? Increasingly there is resentment that whereas the GAA centrally can sweat the asset by being available to other sports, local units cannot rent out their facilities.

If that represents a step too far for the association at large, at least let there be introduced at next year’s congress a streamlined process for adjudicating these matters sensibly and quickly.