Seán Moran: How has it got this bad for Offaly hurling? 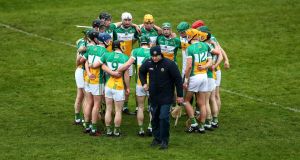 Offaly manager Kevin Martin with his team at Bord na Mona O’Connor Park, Tullamore, earlier this year. Martin has handled all of the adversity visited on the team with admirable poise. Photograph: James Crombie/©INPHO

The levee broke at the weekend for Kevin Martin. Losing by 13 points to Westmeath in Mullingar in the McDonagh Cup was fairly depressing, even if losing to Westmeath is no longer unthinkable. Just three years ago, the margin was 14 but it was the tenor of this defeat that struck most Offaly people present.

By Monday the county board announced what was pointed out by Irish Mirror journalist Pat Nolan as the fourth mid-season departure of a senior Offaly manager in 10 years.

Pat also said that although there was nothing new in recent times about going to an Offaly hurling match and declaring it “the worst ever”, Saturday actually was the worst ever.

How did it come to this? Less than 18 months ago it was Offaly winning by 13, having run Dublin ragged at Croke Park in Kevin Martin’s first league fixture. That wasn’t an isolated impact, either. In the quarter-finals the team pushed eventual winners Kilkenny all the way before losing by just two points.

They were unlucky in last year’s championship to draw the short straw of four successive match weekends and there was further misfortune in the sequencing that saw them face Dublin – always their most likely relegation rivals – away from home on the last date in that four-week schedule.

By then the encouraging performances against Galway and Kilkenny had begun to flag and they headed to Parnell Park on the back of a mauling by Wexford. The outcome was predictable and afterwards Martin referred to how hard it would be to improve when deprived of matches against the best teams.

The Offaly manager has handled all of the adversity with admirable poise. He always spoke with the media, no matter how downbeat the match had been and always came across as acutely aware of what needed to be done to get the county back on track and the effort required to bridge the growing gap between them and the elite, MacCarthy Cup counties.

There was a view that he found it hard to relate to a generation of players, for whom representing the county was an option rather than an opportunity. How could it be otherwise?

At the start of the year, Kilkenny’s Eddie Brennan took over in Laois and spoke to local media about his bafflement at such attitudes.

“It’s something I just do not get. I just can’t understand why lads would not want to hurl for their county.” Of course a player who had won eight All-Ireland medals with his county would be unlikely to understand.

In the meantime Brennan has adapted well, got Laois to a league quarter-final where they did their best against All-Ireland champions Limerick and they are many people’s pick to win the McDonagh Cup, having also beaten Offaly.

The point is that Martin is cut from the same cloth. His playing career coincided with the second wave of Offaly’s All-Ireland winning exploits, in the 1990s, during which he was twice an All Star wing back. He was a top player and in time took on the management of the county at a stage when applicants weren’t exactly queueing around O’Connor Park.

That background may have made it difficult for him to relate to the reality of a modern Offaly player’s lot and some of his dealings with players have been abrupt or, on one occasion,when taking players to task for an incident of indiscipline, melodramatic.

It is nonetheless dispiriting to think of someone of his status in the game having to stand watch on the sideline as his team drifted aimlessly to defeat; Westmeath players are believed to have been surprised at Offaly’s predictability and the attitude of some of their opponents.

Nub of the problem

On RTÉ, Martin’s former team-mate Michael Duignan made the point that it was as if the entire “ills of Offaly hurling had been placed at his feet” and that gets to the nub of the problem.

It’s still less than 20 years since the county last reached an All-Ireland hurling final but the downward sweep of Offaly is readily detectable in a range of statistics. At senior level the county has just one win over a current MacCarthy Cup opponent this decade – Wexford in 2012 – or two if you count beating the 2010 shadow side, fielded during the Limerick strike.

There have been four wins, one draw and 20 defeats, by an average of slightly more than 12 points. In the same period there have been no wins over MacCarthy Cup counties at either minor or under-21 level.

Two years ago the hurling review/implementation committee resigned en masse on the grounds of “lack of support and progress from the Offaly county board”. Chair Liam Hogan described the state of hurling in the county as “deplorable”.

It is a stark fact that of all the counties to have won the hurling All-Ireland more than once, none have ever fallen to a greater depth than Offaly – a fact emphasised in these days of graded championships as they desperately fight to avoid dropping to the third tier.

Joachim Kelly, another legendary figure from the days of plenty, has volunteered to take over for the remaining matches and surely there is enough in the team to succeed in the modest ambition of staying in the McDonagh Cup.

Twenty-one years ago, another manager departed mid-championship: Babs Keating undone by his “sheep in a heap” analysis of his players’ 1998 Leinster final defeat. Michael Bond stepped in and promptly – well within two months or so – delivered an All-Ireland, Offaly’s last.

That, however, was mercurial; to return to those days would require the miraculous.