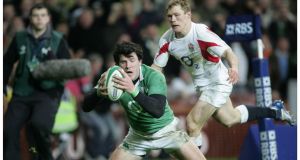 Shane Horgan scores a try from a chip from Ronan O’Gara’s boot against England at Croke Park in 2007. South Africa later invited Mickey Ned O’Sullivan over to coach their players how to catch the ball higher in the air. Photograph: Alan Betson

The use of Croke Park for other sports has marked its 10th anniversary. It was more significant for rugby than for soccer, encompassing the first grand slam in 61 years and what was for a while a world record attendance for a club match, but overall it now generates just nostalgia for the four seasons the “competing” sports lodged on Jones’s Road.

Rugby always appeared a closer sports form to football than soccer despite the round ball and one of the high points of the big win against England a decade ago was the try scored by Shane Horgan after Ronan O’Gara had turned England’s in-goal area into a high-fielding contest between the big winger and Josh Lewsey, five inches shorter and not from Meath.

Tactical cross-pollination between Gaelic games and other sports has become more prominent in the modern era and the very skill Horgan demonstrated in scoring in Croke Park symbolised an asset that rugby players with a GAA background naturally had: being comfortable catching the ball over their head.

It became such a matter of interest that former Kerry player and manager Mickey O’Sullivan was invited to South Africa in 2006 to coach rugby players in catching the ball higher in the air and giving themselves that bit more time in defence, an explosive launch at re-starts and – using video of the Horgan try as example – variety in attack.

“They didn’t want anyone from Australian Rules because they had a thing against Australia,” O’Sullivan told Kieran Shannon in the Irish Examiner three years ago. “So they rang Conor (O’Shea, current Italy coach) who recommended me.

“So to let them know where I was coming from I brought them a DVD of the 2005 All-Ireland final: Tyrone-Kerry. I showed them 10 minutes of it. ‘That’ll give you an idea.’ They said ‘No, we want to see it all.’ They couldn’t get over the intensity and the fact they were all amateurs playing in front of 80,000. Jake White and the coaching staff wanted to know ways and drills that could help raise their intensity.”

The influx of footballers from Ireland into Australian Rules also had an impact with Premiership-winning Collingwood coach Mick Malthouse referring to “the Gaelicisation of AFL” – the evolving emphasis on greater mobility in the game and the use of kick passing.

It hasn’t been one-way traffic. In 1990 the GAA adopted one of the most significant reforms in football by allowing frees be taken from the hand. There is debate about whether this has been for the best in terms of converting frees with traditionalists pointing out that placed balls were more reliable but the impact on frees awarded farther out has been considerable, speeding up the game.

The idea took root during the early international rules series in the 1980s.

On Tuesday Kerry’s Kieran Donaghy was named in an Ireland senior basketball squad. When earning the Footballer of the Year award in 2006 his displays revived memories of the big, traditional full forward on the edge of the square.

Donaghy, however, brought more than a target man’s physique. His basketball acumen gave him quick feet to position himself perfectly under high diagonal deliveries and his dexterity enabled fast, accurate hand passing when in possession.

Trevor Smullen, the former Longford footballer and basketball player, described the influence to Keith Duggan in this newspaper two months ago.

“For instance, maintaining possession is critical in basketball. That has entered the thinking in Gaelic football: if you turn the ball over, you probably aren’t going to win the game. Teams just don’t want to give away possession. If you have the ball, the other team can’t score.

“If teams press high, opposing teams would rather work the ball through the hand to the 45 rather than risk the kick. And statistics have come into Gaelic football in a big way: the kick-pass is more risky and if you turn the ball over closer to your goals the chances are it will lead to a score. All of that thinking comes from the American side of things.”

Fifty years ago this week in a fundraiser for Conquer Cancer, a number of different sports did battle in Galway on an indoor five-a-side soccer court. It was said at the time to be the first event of its type and how it escaped the terms of the “Ban” on foreign games isn’t clear.

Anyway, the GAA team featured some of the great Galway names of the time: All-Ireland winning captains John Donnellan and Enda Colleran, Bosco McDermott and Johnny Geraghty beat the rugby selection but lost 5-2 in the final to a Sligo Rovers team featuring David Pugh.

Four years later when Rule 27 was abolished at the 1971 congress, Pugh - together with Gerry Mitchell – became the first soccer players empanelled by their county when both got called up by Sligo for the championship and did well enough to take that season’s All-Ireland finalists Galway to a replay in the Connacht final, which they lost by a point.

In the 46 years since the abolition of the “Ban” the GAA has been disappointed at how their traditional schools have embraced other sports whereas other schools haven’t reached out to Gaelic games but that underestimates the shift in sporting patterns.

In Dublin for instance, rugby players like Brian O’Driscoll and Ian Madigan who went to Blackrock College both played football when they were young and in the past few years their fellow alumni Michael Darragh Macauley and Cian O’Sullivan have won All Stars and All-Irelands.

Ultimately the most valuable asset Gaelic games picked up from other sports and the big dividend of repealing the “Ban” has been players. smoran@irishtimes.com