Seán Moran: GAA wants to stop procrastinating, but not just yet 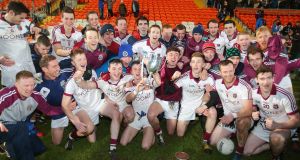 If the GAA’s recurrent problems throughout its history – 133 years and counting this month – can be categorised, a significant space might be found for the file on procrastination.

Ancient history saw championships hardly ever completed in the appointed year. Obviously during times of upheaval that was impossible to avoid but before that period 100 years ago, there were frequent disputes and postponements where various interests weighed more heavily that the completion of the games schedule.

The phrase ‘slow to change’ has a couple of meanings: one suggests an antipathy to or a distrust of doing things differently but the other, and it is argued more relevant, definition is the literal one of simply waiting longer than necessary to follow what evidence strongly recommends as the correct course of action.

When the headline bans of the past 50 or so years – especially the prohibiting of Northern Ireland security forces personnel from membership – were being debated, one frequently-heard phrase was ‘when the time is right’. The GAA wouldn’t be found wanting when the time was right.

Yet the tendency was for repeal of these measures to happen only when a deadline loomed – the rebuilding of Lansdowne Road or the establishment of the PSNI – and for inordinate self-congratulation to erupt.

Aside from the high-controversy of those issues, matters have been simple, day-to-day issues the solutions to which have been deemed more trouble than continuing to cope with the problem.

The related difficulties of club fixtures and under-age player burnout are obvious examples.

When originally addressed, the suite of hard-worked proposals to address assorted problems was picked apart by arguments that had little to do with the matters at hand but were a protection of the status quo for no more compelling reasons than short-term convenience and perceived self-interest.

The abolition of the under-21 football championship was originally shot down because counties had a good team coming through and the matter at issue could be dealt with differently. Eventually – nearly 10 years later – the grade is gone but the merits of the original argument were as clear when it was first aired.

It is fair to say that this tendency towards short-termism has been less marked in recent times and as a consequence the GAA faces into the most radical year of change, arguably in its history.

The association is going to be flat to the boards from January to the end of August negotiating a calendar of fixtures coming thick and fast and even the close season after the league will be a challenge to enforce and make sure that the liberated dates get used by clubs rather than inter-county managers.

The one piece of the jigsaw missing is currently on view, as the club championships wend their way towards provincial completion. The idea of introducing a calendar year into the club All-Ireland schedules has been around for a good while and as a concrete proposal has been knocking around Croke Park for the past couple of years.

It hasn’t gained much traction and it is spoken of with wariness, especially in the provincial councils of Leinster and Munster, both of whom have substantial senior championships to organise in both football and hurling.

It is understandable that with significantly intensified inter-county schedules, the GAA chose not to try and push the club calendar year for the time being but it is again, a deferral of the inevitable and for no good reason except that various units haven’t got their heads around it yet.

In the next two weekends it is likely that the provincial championships will be finished and the field cut to four in both hurling and football. We are clearly a little too advanced towards Christmas to find the time to stage All-Ireland semi-finals and finals but it would at the same time entail just two additional matches for the respective finalists.

This makes it frustrating that half of the four remaining teams in football and hurling face the prospect of waiting more than three months if they are to go the distance.

Imagine how the lot of a club player could be improved were they to be done by the holiday season. Those fortunate enough to win would have a great Christmas and those that didn’t make it would at least have a Christmas.

It is accepted that the feats of Slaughtneil, winners of everything that glisters in Ulster, would complicate that process – just as in a non-calendar year they impacted on the Fitzgibbon Cup – but no organisation can draw up its regular schedules based on contingencies for rare, historical achievement.

There are other impacts as things stand. Certain Ulster counties – traditionally Antrim but also Derry and Down – and to a lesser extent Galway have been affected by the unavailability of some of their best players during the league, as the club championship overhangs into the new year.

The changes to the inter-county schedules, being trialled over the next three years, were designed to make additional time available to optimise the club season.  The calendar year would have been one of those measures and it’s a pity for whatever reason that it will be another of those reforms whose introduction will lag behind its obvious desirability.