Seán Moran: GAA’s growth in US shows how clubs should be focus of reform 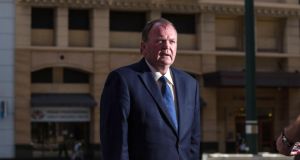 GAA president Liam O’Neill stood by his projection that the GAA was on its way to having more members overseas than at home. Photograph: INPHO/Cathal Noonan

Early GAA interaction with the United States was complicated. The 1888 season became the only one in the history of Gaelic games to be written off entirely. This was so that a promotional tour of the US could be undertaken by the top hurlers and athletes of the time.

The scheme was simple. Send over the players and enhance relations with the large Irish-American community and raise substantial revenue from a series of exhibitions and fund-raising events.

It was a headline in Michael Cusack’s short-lived Celtic Times that grandiosely dubbed the exercise, ‘An Invasion of America’ – the now wryly humorous title under which the whole fiasco was to go down in history.

“If the preliminary expenses were forthcoming,” wrote Cusack, “the Irish-American gate money would clear all other expenses 10 times over.”

Without being revisionist about the whole exercise it’s possible to isolate one positive outcome and that was the cementing of relations between the GAA and the Irish-American community, which have continued to endure well over a century later.

Last weekend this year’s All Stars tour came to Boston. Although the exhibition match itself is a light-hearted affair – replete with double-digit goal tallies and counter-attacking goalkeepers – the impact of the visit is significant to the Irish community in whatever part of the world the tour visits.

GAA president Liam O’Neill went out of his way to praise the players, who after some vigorous socialising on Friday night were all present and correct – apart from the injured members of the tour – early the next morning to go out and coach children at the Irish Cultural Centre in Canton.

Of course that function is sadly still necessary but the promotion of the games has also become a more extrovert process, equally concerned with opening up the games to people without Irish connections – in other words, presenting the games as worth playing because they represent an attractive recreational activity, which happens to be distinctively Irish.

The children who were coached by the All Stars at the weekend were from Boston and also the powerhouse New York club Shannon Gaels, which in the space of 12 years has gone from foundation with one under-10 team to 600 members and 22 teams and which brought its kids to Croke Park during the summer to play in the mini-games at half-time during the All-Ireland quarter-finals.

O’Neill, who bullishly stood by his projection from two years ago that the GAA was on its way to having more members overseas than in Ireland, has also been strong in his opposition to what might be called the old model of overseas GAA, traditionally prevalent in North America, which has seen players imported from Ireland to stiffen the challenge of teams in local championships.

As the president pointed out, any club at home, which set out to win a county title by ‘buying in’ prominent players from elsewhere on a short-term arrangement, would be regarded as a laughing stock.

His radical call for US fundraising to be confined to local units as opposed to being harvested by home-based ones, such as the Gaelic Players Association and various county boards, emphasises the importance of developing the GAA overseas as a viable, self-sufficient operation.

More significantly though, is the overseas experience with the greater importance it affords participation and local involvement about to impact on the games at home?

The plight of club players, however, with their fractured and in places non-existent programmes of matches has got to the stage where a fundamental re-evaluation has taken place.

Is the GAA more about the provision of high-profile, box-office events than the simple provision of matches for its players? Is the number of people playing the games not the most reliable indicator of the overall health of the association?

Obviously it needs public profile to continue to attract players but when that profile is coming at the expense of undermining 98 per cent of the active membership, clearly a change of course is needed.

People don’t necessarily play Gaelic games in order to celebrate their Irishness but anywhere that the games are played with enjoyment and enthusiasm, by its very nature celebrates the national identity.

And that should also be the case at home.