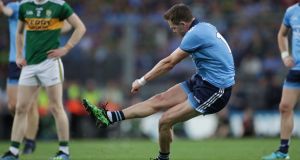 The fuss over tuition fees for Dean Rock’s place-kicking academy has again focused attention on the GAA’s amateurism rules and the extent to which people are allowed to leverage their involvement within the games.

The Dublin forward, who is within two points of Jimmy Keaveney’s all-time scoring record for the county, announced ‘The Dean Rock Free Taking Project’ earlier this month. Its stated purpose is ‘to inspire and educate current and aspiring free takers’.

Having quoted prices ranging from €350 for two individual sessions, reducing to €200 thereafter, to €650 for groups of four, reducing to €400, Rock’s project quickly divided opinion on social media with some, including prominent former intercounty players, like Kieran Donaghy and Eamon McGee defending him but others taking issue, especially at the prices.

Rule 1.10 of the Official Guide states: “A player, team, official or member shall not accept payment in cash or in kind in conjunction with the playing of Gaelic games.”

This rule was scrutinised three years ago but has remained unaltered in the meantime despite legal advice that it had become if not meaningless, then certainly porous.

There are two issues: what does ‘in conjunction’ mean and what appetite has the association for enforcing the rule?

Taking the second question first, the answer is very little.

Former director general Páraic Duffy famously produced a discussion paper on the payment of managers in 2012 and suggested three options. One was to allow managers and coaches be paid for their work, two was to crack down on the activity and implement the rule and three was to continue to do nothing.

It ended up – to Duffy’s dismay rather than his surprise – with an enthusiastic endorsement of the second option but as soon as the vote was over, the continuing embrace of the third.

Nearly three years ago there was a previous focus on the subject when Kerry’s Colm Cooper held a testimonial dinner on his retirement from intercounty football. Proceeds would be split between him, Kerry GAA and designated charities.

Whereas the two events – testimonial and paid coaching or tuition – are quite different, the Cooper dinner was the last time the GAA received specific legal briefing on the subject of its amateurism rule.

Croke Park had to consider whether the testimonial was in line with Rule 1.10 as well as a response to the invitation to support it – they decided that it was and that they wouldn’t.

What still remains of relevance is the advice that the rule had become virtually meaningless as a result of its evolution down the decades and the growing number of exceptions made from newspaper columns, punditry in general and endorsements.

The legal opinion dealt with circumstances in which a player or unit might be disciplined for breaching the rule and the likelihood of any punishment withstanding a challenge to the Disputes Resolution Authority, the GAA’s independent tribunal of arbitration.

“Any such proceedings could only be contemplated in circumstances where there was a clear violation of a prohibition set out in Rule 1.10.”

The opinion went on to argue that a successful ‘prosecution’ for clear violation would have to show a breach of the prohibitions on pay-for-play, appointing an unauthorised agent, receiving greater expenses rates than allowed by Central Council or full-time training.

There was only one case that had ever reached the DRA on the subject of amateurism, Mark Conway v Central Council (DRA 3/2008).

The advice to the GAA said of the decision in the above case: “At paragraph 39 they noted the real core of the prohibition is found in the expressions ‘payment in cash or in kind in conjunction with the playing of Gaelic Games’ and ‘full time training’.

The GAA’s legal advice homed in on the phrase and appears to limit its application to straightforward pay-for-play.

“The word conjunction does not mean the same as connection. Conjunction conveys the notion of two or more events or things occurring at the same point in time or space.

“Whereas it could be argued that payment arising from a testimonial is in connection with playing, it certainly is not in conjunction with playing. Similar arguments would apply in relation to a former player engaged to act as a commentator.

“There is no doubt that the payment is in connection with his [Colm Cooper’s] playing of Gaelic games. Likewise, a player who has a marketing or sales role for a commercial entity. It could be said that the payment they receive is in connection with the playing of Gaelic Games but clearly the word conjunction was used to avoid a breach of the rules in such circumstances.”

In the meantime, there has been no move by the GAA to redraft the rule or replace ‘in conjunction’ with ‘in connection’ and the phraseology in the most recent Official Guide, published in March 2020, remains unaltered.