Seán Moran: GAA must get serious on match brawls

Flashpoints between players and opposing team officials need to be discouraged 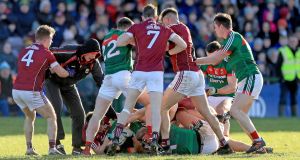 Had the GAA wanted to screen a promotional video to highlight issues relevant to its motions list at Congress in just under a fortnight, it would have done well to come up with the events of the weekend.

Last week’s announcement of the motions revealed that when Wexford manager Davy Fitzgerald space-invaded Nowlan Park in the AHL semi-final against Tipperary last April, he triggered a sequence of events that inspired not one but two proposals for this year’s clár.

Fitzgerald’s entry onto the pitch culminated in a confrontation between Tipperary player Jason Forde and the Wexford manager in which the latter was pushed.

In the aftermath Fitzgerald got a two-month suspension, which he accepted, under Rule 7.2 (c), Category IIa of the GAA’s Official Guide: “Any type of physical interference with an opposing player or team official.”

Forde’s case was more protracted. He hadn’t been sent off so the matter was taken up by the GAA’s Central Competitions Control Committee (CCCC), who initially proposed a two-match ban in respect of “any type of assault on an opposing team official”. The player requested a hearing. His county were unhappy at the description of the altercation as “assault” and were prepared to argue this at the hearing.

The CCCC evidently sensed the same fragility about their case, because the charge was amended to the lesser one of “contributing to a melee”, carrying a one-match suspension – which is what the player was ultimately given.

There was no procedural issue, as the GAA’s disciplinary body is allowed to amend a charge if it feels it more appropriate and in this case it was believed that the lesser infraction would be easier to prosecute, as there were misgivings about the gravity of an assault charge.

The two motions to deal with this come from the association’s Rules Advisory Committee (RAC) and Tipperary, but they address the Forde case from opposite ends of the spectrum.

The RAC simply proposed to include in Rule 7.2 Category III a milder form of the assault infraction, which would merit a one-match suspension: “(vii) minor physical interference (eg laying a hand on, pushing, pulling or jostling) with an opposing team official either on or off the field of play.”

Meanwhile, Tipperary wish to define a melee as something requiring the involvement of five or more participants – a definition that would have made the current rule inapplicable to Forde.

Last weekend in the football league, two prime illustrations of what is being addressed erupted onto the nation’s screens.

In Salthill the melee – by anyone’s definition – that broke out in the 65th minute featured in its midst Mayo selector Tony McEntee. His contribution wasn’t notably wild and for much of the 20-plus players fracas he was more sinned against than sinning, but he still definitely ticked the box of “physical interference with an opposing player” and shouldn’t have been there.

As regards the Tipperary motion, the definition of melee as involving at least five people appears permissive.

Many team sports define the “third man in” as being the most important target for deterrent in outbreaks of indiscipline, because this isolates the misbehaviour and punishes whoever is trying to aggravate the situation. As it stands, the term “melee” is sufficiently broad to allow the CCCC to make its own call on what constitutes contributing to one.

In other words, any participant who involves themselves in these situations should be accountable.

In relation to opposing team officials, there are questions about some of the incidents in Pearse Stadium involving Tony McEntee, who was at one stage dragged to the ground.

This rule also came into focus in Cusack Park in Ennis, where Clare’s Jamie Malone was red-carded for an infraction. In his anxiety to secure the ball, which had gone over the sideline, he pushed Tipperary selector Shane Stapleton, with the unintended consequence that the latter cracked his head off a concrete fixture and spent the night in hospital under observation for concussion.

The push itself was clear, but did it constitute “assault” any more than Forde’s involvement with Fitzgerald last year?

In this case it probably won’t matter, as the incident will have been included in the referee’s report and will have a stronger status than a post-hoc finding by the CCCC.

Flashpoints between players and opposing team officials need to be discouraged more firmly than is currently the case. Even the GAA’s amendment, introducing the concept of “minor physical interference” as well as assault and cutting the suspension to one match, is questionable.

If the concern is that “assault” is too serious a term to describe many of the incidents that take place involving players, simply bring the rule in to line with that governing team officials: “any form of physical interference” with an opposing team official.

It would probably be a good idea to leave the suspension at two matches in order to discourage the practice.