Divisions in the association should be resolvable by regulation. Why is this so hard? 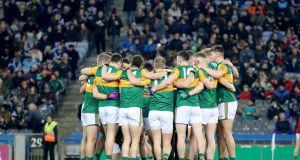 Kerry players form a huddle at Croke Park. “The combined cost of preparing and fielding senior inter-county teams for the 32 counties came to €29.74 million in 2019,” according to director general Tom Ryan. Photograph: Billy Keane/Inpho

The onset of Congress, particularly in an election year, intensifies interest (well, sort of) in governance and administration but, such is the range of issues and conflicting interests, there’s a thin line between joined-up thinking and cognitive dissonance.

Last week’s annual reports sketched a relatively positive picture for the association in that the main sources of income remain robust – gate receipts buoyant because of the rise in admission prices and better luck than in 2018 with the late-season, big-match pairings – and governance in general steady as she goes.

Beneath the surface however, and not just in recent years but increasingly over a period, the GAA has been battling sectionalism and its effects.

Centrally there is the division between the Croke Park administration and local units, generally presented in the modern idiom as a ‘disconnect’. It may be merely reflective of a world in which all administration is regarded with hostility, regardless of merit, but it drives discontent.

This is especially true of the GAA’s commercial dealings and is unlikely to change even as the ‘suits’ triumphantly declare, as they did last week, that they have squeezed the margins sufficiently to ensure that 84 cent in the euro – as opposed to 83 last year – goes back into the organisation.

If there’s not much that can be done about that in the prevailing culture, other conflicts are more self-inflicted.

Even something as unexceptional as director general Tom Ryan’s warning about the unsustainability of the rising costs associated with county teams created a furore of sorts.

“My principal financial misgivings are not revenue-related, however,” wrote Ryan. “The combined cost of preparing and fielding senior inter-county teams for the 32 counties came to €29.74 million in 2019. This was an increase of 11.6 per cent over the previous year, a trend that simply cannot continue.

“This outlay represents a huge proportion of our collective resources. So, the other unseen cost is of all the other GAA plans in a county that are foregone or neglected – coaching, club support, facilities and so on.

“The origins of these costs are many. The scale of professional expertise engaged with teams is ever increasing, and the size of panels similarly. There is a responsibility at national level too, with the extent of the inter-county season.”

The Gaelic Players Association took umbrage at what it described as the depiction of the inter-county game as a problem child.

“Instead,” ran the statement, “we should be celebrating the inter-county games for the success story that they are.  The resources our members help generate enable the GAA to be the fantastic community and club-based organisation it is.”

Whereas the GPA are correct about the centrality of inter-county activity to the overall finances, that argument is starting to creak. Ryan’s point was that the costs associated with the elite game are every year closing the gap on what’s raised by it: in 2019 €30 million against €36 million.

Once those graphs cross, inter-county activity becomes a liability. Already it’s tightly balanced, as out of the 364 match days under the aegis of Central Council, just 42 turn a profit.

Given that the costs of preparing teams fall on the counties, the central exchequer is arguably a transfer of funds from local units to Croke Park so it is in everyone’s interest to address the matter.

One straightforward remedy is a simple insistence on observing rules and regulations, which if evenly applied would at least ensure that various measures have the impact that was originally envisaged for them.

Misgivings about such an approach can be gleaned from the DG’s cautionary note when floating the idea of regulatory control.

“The solution may well be with rules and spending caps. I am hesitant because our track record with similar rule-based enforcement around county teams is mixed.”

In other words, new rules would be a good and useful way of dealing with this – were there any prospect that they’d be obeyed.

It’s understandable that the GPA have an interest in maintaining the steepling nature of this expenditure, as it ultimately benefits county players at least in one respect, preparing for matches.

Viewed from another perspective, the costs are part of a process, which ratchets up the demands and commitment levels imposed on and expected of GPA members – the extent of which has been highlighted in ESRI reports.

Presidential candidate Jarlath Burns believes that the players’ body should be involved in reversing this trend rather than driving the market.

“Niall Moyna says that teams could train 40 per cent less without affecting the quality of the games,” he said to this newspaper. “Amateur status isn’t primarily about pay-for-play; it’s about making the games accessible to all.

“The GPA should take a lead on this and state their players aren’t available until January 1st and during the Allianz Leagues for only two nights a week. Fine counties, who fail to comply.”

Another candidate Jim Bolger also addressed the issue by proposing that county managers should concentrate on coaching but be subordinate to a general manager, who would be in charge of backroom teams and recruitment and answerable to the county executive.

Not that it would be easy for that to gain acceptance among a constituency accustomed to a high degree of control in their dealings with county officers.

If there were any ambiguity about that, all we need do is look at the under-20 football managers whose grand designs were obviously so implacable that rather than enforce the rule that they shouldn’t organise collective training before April, the GAA decided to relocate what is a development competition from summer to now – the busiest time of the year for young players.

When sectional interests outweigh regulatory frameworks, any organisation would have a problem.