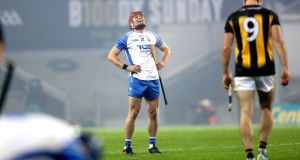 Another remarkable weekend, or at least one in which something remarkable happened. Waterford’s rise from the ashes on Saturday evening gave the hurling championship its own underdog narrative just a week after football had splintered some rock-solid assumptions.

In the euphoria of the more exciting matches, it can even be possible to forget that you’re in an empty stadium where the shouts of the players can be heard.

With novel closing stages in both championships and the sheer relief of the championships on course to be completed, it promises to be a content Christmas for the GAA and Gaelic games supporters.

It has also distracted them from worrying about the future and what’s coming next and it’s been a successful distraction.

As a preliminary though, Saturday and aside from Waterford’s high-energy second-half, which brought about the famous win, there were the facts that spelled out how important beating Kilkenny was for the team.

Historically, it was only a third win over the neighbours in 14 championship meetings and the first time that Waterford had achieved back-to-back wins in the fixture - building on the 2017 qualifier success.

On the night, at half-time very few were envisaging Liam Cahill managing to roll away the stone in the time that remained. Put it this way: in Brian Cody’s 16 previous championship defeats over 21 years, never has the team that defeated Kilkenny had to overcome a seven-point half-time deficit.

In fact, out of all those 16 matches, the eventual winners only trailed at all in just four of them and each time, the interval margin was a single point. So, precedent was that you can’t let them out of your sight by half-time - which Waterford appeared to have done.

It’s given us a unique final pairing to close off a strange year and now as we enter the final month of 2020 with four matches left in the GAA season, the realisation is beginning to dawn that 2021 is an uncertain prospect.

Of course it hasn’t just dawned on the central administration in Croke Park. Once the second wave began to break this autumn, it was pretty clear that it wouldn’t be all over by Christmas and in his briefing on the then upcoming intercounty schedule of fixtures in September, Feargal McGill, the GAA’s head of games administration, acknowledged as much.

“Unlike when we were talking to you previously, I think we’re at a situation now where we know that next year is going to be an exceptional year as well. It’s not going to be a normal year. We know that now.”

Earlier that month, former association president Nickey Brennan had taken a bleaker view of what was to come, telling The Irish Times: “Around 550 people are employed all around the country aside from Croke Park. If you were to look at that payroll annualised, you’re probably talking north of €20 million. Income will be media or as much of it as can be brought in and the same with commercial or sponsorship.

“If all came to all the GAA could probably live with it for 2021 but it would mean radical change and people being let go and other deep cut backs and it would take the GAA 10 years to fully recover from that unless there’s significant money coming from Government and public funds are going to be scarce.”

Money did indeed come from the government but resources are still stretched thin and that consideration intruded on the Central Competitions Control Committee plans to line up next season with the leagues coming back in late February and the championship running into midsummer before the clubs return to action.

This inversion of what happened in 2020 is effectively the ‘split season’ option for the reform of the fixtures calendar. It is also the most obvious template for the coming months when short of a breakneck rollout of vaccines, public health restrictions are likely to be still in force probably no better than at Level 3.

In those circumstances there would be no club matches allowed so it makes sense to proceed on the basis that the intercounty season should come first.

The progress of the CCCC plans has been held up by financial concerns that if the GAA is to face into another year of curtailed activity, it might be better to reschedule the intercounty season to the end of the year, as is happening at present, on the basis that attendances might be possible by then and consequently the chance of something for the cobwebbed coffers.

That approval for the planned season has been detained by a desire to generate revenue was more delicately re-phrased by one GAA official: “We have a preferred way for the season to run and we’re just trying to figure out how to finance it.”

An obvious way might have been to alternate the seasons, opening with the league as earlier this year, then running the club championships before proceeding to the intercounty championship. After all that’s how it played out this year - albeit by accident.

The problem with that is the recurrent one of regulation and demarcation. Were the intercounty championships to bookend the club season, the concern is that players would know no peace from county managers. At least this year there was a total lockdown for about two months when nothing at all could take place.

The likelihood is that the CCCC plan will ultimately be approved but as long as matches are ordained behind closed doors, the question of public funding will never be far from the thoughts of GAA and indeed all spectator sports.

We’re likely to have a merry Christmas but the prosperous New Year is less assured.