Seán Moran: From here to eternity – loss and legacy in GAA 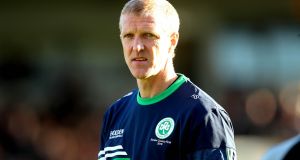 The falling of the year naturally gives itself to elegy and if the Irish reputation is for dealing well with death, the GAA epitomises it. All around the country, it is commonplace to see funerals taken under the care of local clubs with everything from guards of honour to the directing of traffic organised by the community.

It was striking in Kilkenny after All-Ireland champions Ballyhale Shamrocks had retained their county title against James Stephens, to hear the sober reflections of team captain Michael Fennelly and manager Henry Shefflin on the theme of loss  in the club.

To have lost two young players in successive years is an extraordinary burden for what in spite of their remarkable success is a comparatively small catchment.

Eugene Aylward and Eoin Doyle died so suddenly on the roads this month and last year that it was like a rupture in the natural order.

The cliché is that such events “put sport in context” but unusually for clichés it’s a distortion of the truth because sport was an important part of both young men’s lives. It was a context in its own right.

No one suggests anything other than such bereavement to be a terrible loss to bear but the GAA is built in the community and does its best to comfort and commemorate.

Michael Fennelly, somehow still getting around the field and to great effect for his club, was hauntingly eloquent in his victory speech when he addressed Eugene’s family.

“. . . words, they have meaning but actions speak louder and I hope our actions over the last couple of weeks have helped ye on that journey and gave ye some sort of comfort, no matter how small it is and this cup here is a dedication to Eugene’s name.”

Shefflin, already bringing his stardust to the sideline as surely as he did beyond it during the game’s pre-eminent career, also took care to align achievement with remembrance when asked about his team’s upcoming Leinster campaign.

“Last year we were fortunate to win it in Eoin’s memory and as Michael said, this is in Eugene’s memory. Who knows what comes after this? I’ll tell them in the dressing-room they’ll celebrate more after this than last year, because life is cruel, and there’s been a sadness and a darkness around our community in Ballyhale.

“They deserve a bit of lightness in their lives now and we’ll let them enjoy themselves and we’ll see then after that.”

There were other similar scenarios around the country with success on the playing field co-existing with loss off it but commemoration is so powerful that it can shape the future.

Eugene, whose 23rd birthday falls on Thursday, will be ever remembered, gazing out of a photograph in his Ballyhale jersey into the great unknown adventure of a future that never came to pass.

Liam Griffin, the great Wexford hurling manager, who together with Armagh’s Joe Kernan was inducted into the Gaelic Writers Association Hall of Fame, made a characteristically perceptive point when reacting to a different sort of hurling death, the weekend’s passing of Art Foley – the last member of the county’s legendary 1950s team.

The death, he said, should be “a celebration because so many of them lived to be a good age and we got so much in Wexford from them.” Foley was 90 and had lived a full life here in Ireland and then in the decades that followed, in the US.

If in the words of Kevin Cashman, recalling the immortal winning score by Ciarán Carey in the 1996 Munster semi-final in Limerick’s Gaelic Grounds, “Mackey has his stand; very shortly, Power shall have his monument; Carey has That Point. The greatest winner ever scored,” well Art Foley has The Save.

Recalling how he had stopped the shot from Christy Ring in the dying minutes of the 1956 All-Ireland final with Wexford’s lead over Cork standing at an insecure two points, in an interview with New York newspaper the Irish Echo, he said that at the time he was surprised that Ring hadn’t taken the ball closer to the goal.

The rebound went wide and from the puck-out, Jim English passed to Tom Ryan. According to Griffin, Ryan “played the most spectacular hand pass to Nick Rackard, who stepped back outside the 21 – not inside it – before letting fly a rocket”. That was the game.

Griffin, like many, believes that the save won the match for Wexford because had Cork gone ahead, having trailed for nearly the whole match, they would have had the memory of beating their opponents two years earlier and gone on to win.

Furthermore, he believes that the save changed hurling history because it secured for the winners the recognition of posterity.

“It was a seminal moment because without it Wexford wouldn’t have been ‘crowned’ in the way that they were. They had become new champions in 1955 but by then had lost finals to both Tipperary and Cork. Had they lost another to Cork in 1956, I can’t see the legend of Wexford hurling having taken off the way it did.

“That confidence was built on in the 1960s and we drew on it for 1996. The crowds for Wexford hurling that we still see don’t come from nowhere. They grew in the 1950s. Without the status that winning in 1956 gave us, I don’t see how the rest could have followed.”

Creating legacies is a huge part of what the GAA does. Not all are watershed moments in history but they matter to people and communities everywhere.