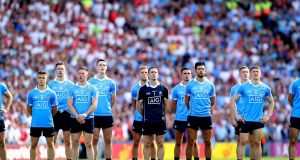 Dublin line up against Tyrone. Lack of competition has long been a reality in the GAA. Three counties have won 75 per cent of the hurling All-Irelands whereas two share an entire half of the football titles. Photograph: Ryan Byrne/Inpho

The island is full of hand-wringing, at least in those places where football is at issue, which is after all more or less everywhere – and maybe with cause.

At the top, the spectacle – or spectre depending on your perspective – of Dublin winning four All-Irelands in a row has created anxieties about perennial or permanent champions.

At the other end, the unhappy realisation that some counties may never win their province again let alone something bigger is causing more unease than it did in the past.

Then, in between the two extremes, there is the grim apprehension that the game itself, the very means of expression between all involved, is fast becoming a mutant variation on what it used to be and was perhaps intended to be.

All-Ireland titles have become the preserve of six-digit populations with both the population and resources to compete in terms of back-room teams and optimum arrangements for travel, training et cetera.

Nearly all of the reforms in recent years have placed additional burdens on smaller counties: a bigger, more compact calendar, which requires deeper panels, as well as the extended number of replacements permitted.

Kevin McStay’s statement, on retiring from inter-county management after three years with Roscommon, touched on some of these issues. The brick wall smaller counties encounter was plain, even with generous benefactors and a well-organised operation in place.

For the second time in four seasons Roscommon were promoted to Division One. Previously they stayed up for two years. The team going up with them for the 2019 league, Cavan, have yo-yoed with two promotions and a relegation in three seasons.

In the past four seasons, of the eight teams who have won promotion to Division One, five have lost their manager before even kicking a ball in the top flight, proof of the immense pressure that exists and in many cases the unrealistic level of expectation, which when disappointed by championship shortcomings simply isn’t resolvable by reference to league progress.

It’s a cliché but only one team wins a competition and if the other competitors are seen to have failed that’s a lot of failure.

Longford’s Michael Quinn, a good footballer with a background in the AFL where he played for Essendon, spoke on RTÉ radio at the weekend about two relevant matters. One was the great satisfaction the county had from beating Meath in championship for the first time in 36 years.

The other was his willingness to give the idea of a graded championship a chance. The problem for such an initiative, which is to be refloated by Central Council, has been that the counties most likely to be involved have usually opposed its introduction so Quinn’s views were timely.

“I’d be in favour of a second tier championship,” he said. “I don’t think I’ll see it in my time. Personally, it’s more games, I want to play more games. Tyrone had ten games, Dublin had eight. I had three games.”

There isn’t enough emphasis placed on the idea of a great result for a county because it gets rinsed away by whatever defeat eliminates the team – in Longford’s case a 19-point pounding by Dublin. But at the start of the year, a win over Meath would have been envisaged as an achievement.

Quinn focused on the incremental value of winning a tiered championship to earn a path up to the top level and his views represent a sensible approach to the season for a county in that position.

These problems require solutions. For the GAA’s entire history there has been inequality at the heart of its competitive structures. Three counties have won 75 per cent of the hurling All-Irelands whereas two share an entire half of the football titles.

In the past the inter-county scene wasn’t quite as vital. It meandered through the year and once counties were beaten that was it. Now there are qualifiers, requiring teams to stay in training for weeks regardless of their prospects and consequent interest levels.

It would actually address a lot of the problems in football were the championship simply to revert to old-style knock-out but players by and large don’t want their training-to-matches ratio careering off in the wrong direction. And administrators can’t afford the loss of revenue that would come with a reduced competitive schedule.

Competition is arguably more of an issue than the quality of the football but there comes a stage at which intervention is necessary.

This week the Slaughtneil-Magherafelt match in Derry with its lengthy, deliberately uncontested passage of play couldn’t have created a more shocked reaction had footage been found in a forest somewhere, like The Blair Witch Project.

Other sports change rules to combat unwelcome trends. Problems may abound but the GAA has the wherewithal whatever about the will to tackle them.