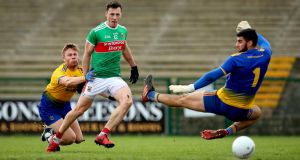 It was bound to happen at some point given the reversion to the ancient format of sudden death but Gaelic football’s “season like no other’ delivered its signature weekend. In the uninhabited and rain-lashed darkness of various venues, the championship lurched off the tracks that most assumed would guide it home.

There’s not much time to pause for reflection but Donegal and Galway were the only contenders not in action at the weekend and pulses have quickened as assumptions have been debunked. With four rounds of fixtures gone since the intercounty resumption, we are literally halfway through the football season; four weekends remain.

What have we learned?

They’re not the first county to come unstuck trying to remedy what happened the previous season. Before the All-Ireland quarter-finals of 2010, I remember hearing how determined Tyrone were to turn the tables on Cork after their All-Ireland semi-final defeat in ’09. The trouble was they were playing Dublin, who then beat them for the first time in 15 years.

As Kevin McStay wondered about Kerry’s ultra-cautious set-up on Sunday, were they preparing for a match that would now never be played? In a way it must have made sense to trial that arduous counter-attacking play with Dublin in mind but when your two top shooters start to misfire, having them mostly surrounded by sappers comes at a price.

Statistically speaking, Kerry were up against it. It’s all of 10 years since the previous year’s All-Ireland finalists bounced back to win Sam Maguire

As it happened, matters were further complicated by Cork’s evident intention to play a dogged possession game and give up few enough turnovers. Throw in a monsoon and the odds on a surprise shrank.

Statistically speaking, Kerry were up against it. It’s all of 10 years since the previous year’s All-Ireland finalists bounced back to win Sam Maguire and although it happened four times in the 2000s, it’s not as common as you’d think – just eight years in the past 50.

Tony O’Keeffe, the former Kerry secretary, used to point out that the county missed out on very few All-Ireland finals of historical significance. He was right.

It’s likely the county intended to be there for the Covid final.

There were good reasons not to be beguiled by Cork’s credentials. Their creditable performance against Kerry last year had been delivered as a high-wire act of going man to man with no extra cover. Bombarding high ball in on a suspect full-back line had also paid out but 2020 Kerry had looked comfortable playing a more cautious game in the recent league.

Ronan McCarthy deserves huge credit for repositioning Cork, particularly amidst the rising pressure of expectation created by last year’s debut in the Super 8s and the under-age All-Ireland successes.

It hasn’t been easy and a season in Division Three wasn’t the ideal preparation, making it a major psychological challenge but the team’s resilience was striking.

The game plan was ambitious – to guard possession and resist turnovers against a team used to playing two divisions higher in the league – but it worked.

Watching them patiently hold on to the ball in keeping with the Dublin template and probe for openings as the seconds evaporated at the end of both normal and extra-time was almost alarming.

You could point out that, in both instances, Seán Powter and Luke Connolly nearly lost possession but Cork’s under-20 manager Keith Ricken pointed out the technical merit in both cases.

Powter, whose immense promise in the 2017 International Rules series had gone untapped through a biblical plague of injuries, had enough momentum to give himself a fighting chance of winning the rebound after he was blocked and before he was fouled for the vital free.

Connolly had the bottle to take on the shot after Seán Meehan – one of five of the 2019 under-20s to see game time on Sunday – had made the incision but showed the mental ice not to rush a shot, instead recycling. Always aim at the far post and if it’s drifting, it might at least stay in play.

James Horan’s team chose the right year to stop flapping about in Connacht. There is a certain irony in how upbeat Mayo looked last year after winning the league and beating Kerry in the final – and how disastrously it all unspooled – and comparing it to Kerry this year winning the league and also exiting the provincial championship in the semi-finals.

Except this is no year to be losing provincial semi-finals.

Mayo’s horizon is now uncluttered by the prospect of Kerry in the All-Ireland semi-final and they will have a considerable advantage of experience over Cork or Tipperary – all providing they beat Galway on Sunday – but performance levels have been reliably good since the resumption.

Conversely, Galway since the resumption haven’t looked as slick as they did back in the spring in losing two league matches, including by a landslide against this weekend’s opponents. Damien Comer is injured and Mayo have restocked with young newcomers.

Sligo’s enforced withdrawal means Galway haven’t played any championship matches whereas Mayo have been in action for the past four weekends.

It’s unlikely however that Pádraic Joyce has completely run out of options and Kerry’s absence is as much an encouragement to them as it is to Mayo – although, interestingly, both the Western counties have actually won their most recent Croke Park championship encounters with Kerry.

If anyone had been asked to write a manual on how to make Dessie Farrell’s first year in charge as awkward as possible, they’d have been hard put to outdo reality. Until last Sunday. The team we all assumed was coming for them is now gone but Farrell has to make up for lost time which, together with the strong possibility that they will be undercooked after Leinster, may leave them vulnerable in the All-Ireland semi-final against the Ulster champions, especially if that’s Donegal.

There’s not much that can be done about it, either.