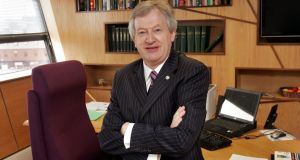 Páraic Duffy: “The FDC debate and the work they did was absolutely crucial, and I think it’s important that that is recognised”

In an age when hyping the mundane is almost a survival strategy, it can be difficult to reach for a reaction when something momentous really is about to happen.

This weekend’s commencement of the GAA’s round-robin quarter-finals actually comes into this category because as a format, even one on trial, it will change the All-Ireland football championship more profoundly than even the qualifiers, introduced 17 years ago.

It’s an old habit of the GAA to arrive at best practice in circuitous fashion. In the past 20 years the intercounty championships have changed beyond all recognition, but they did so as one idea borrowed another, and changes were sometimes rejected out of hand and other times accepted and then given out about before being later amended.

The slow death of the knock-out championship began with the readmission of defeated Leinster and Munster finalists in hurling back in 1996. This prompted a look at the football championship, and although we moved into the qualifier era in 2000 when a special congress accepted that idea, there was a crucial and now largely forgotten interlude in which the Football Development Committee (FDC) reported.

Its proposals, published in 1999, envisaged an amalgamation of league and championship with three groups of 11 – roughly based on Leinster-Munster and Ulster-Connacht plus another for the counties from those provinces that didn’t make the main competition – to play a round robin from March to June.

One of its flaws turned out to be that counties in the third group couldn’t enter their provincial championship even if they did have a chance of contesting the All-Ireland stages.

In the event, the 2000 congress, initially earmarked to discuss the plans, decided instead to pass the buck to a special congress, and set up a new committee to consider new proposals and the FDC blueprint was shelved.

When the new body, the Inter-county Work Group (IWG), came up with the qualifiers idea later that year, its chair, Páraic Duffy, the future director general who had just been put in charge of the old Games Administration Committee, acknowledged its predecessor. “The FDC debate and the work they did was absolutely crucial and I think it’s important that that is recognised,” he said at the time.

Essentially, as the GAA was not prepared for the major change proposed by the FDC, the question became how to create a pathway between the provincial championships and the All-Ireland that would provide more fixtures than the old system.

The qualifier format did that, initially to great enthusiasm but more latterly to grumbles that it had had its day and needed to be scrapped. The ingenuity of the structure was that it diluted the sudden-death aspect of the old championship just about as much as the GAA could bear at the time, provided additional matches and a series of quarter-finals that became the key stone of the bridge between province and All-Ireland.

Quickly counties, players and the public warmed to the idea that the real business of the year began on the August bank holiday, and for the eight counties involved it ranged from being the minimum target they aspired to hitting to an achievement in itself. In all, 23 counties have made it to the last eight since 2001.

There have also been counties that reached their first All-Ireland semi-final in an age – or ever: Fermanagh, Wexford and Tipperary. It has been the basis of criticism of the current trial that those achievements have been rendered less likely but that in itself is an example of the short-termism with which these matters are viewed.

Is it better for emerging counties to spring a big shock once in a blue moon or to get the chance over three challenging matches – just one of them in Croke Park – to improve in the long term?

The latent fuss over the venues has been another example of short concentration spans in that the implications of the format, providing for two Croke Park matches for Dublin, were laid out at the 2017 congress.

Donegal’s complaints that as provincial champions they have been disadvantaged by the sequencing of the round-robin fixtures is interesting because the idea of pairing the provincial champions in Phase 1 was itself intended to address one of the major reservations about the format: that the declining competitiveness of the old quarter-finals posed the threat of dead rubbers in a group format.

Back in 2000, the original IWG proposals had included home venue in the quarter-finals for provincial champions but special congress would have none of it while supporting the blueprint in general. In the intervening years Dublin and Tyrone have advanced proposals for giving provincial winners a second chance.

The new championship makes its first appearance on Saturday, and hopes are legitimately high that it will address the misgivings about the structure it replaces and engage the public with the GAA’s latest iteration of trial and error.