Seán Moran: Extraordinary Dublin in league of their own 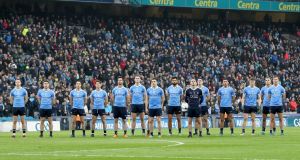 The Dublin team during the National Anthem before their league encounter with Kerry. There is the suspicion whereas Dublin are tipping along nicely that their main rivals are slipping slightly. Photograph: Inpho

Most late, working nights in Croke Park are bathed in the remains of the summer daylight but a 4pm throw-in in early March wouldn’t come into that category. Their laptops open and the vaguely unsettling noise of some stadium machinery clanking into life every now in the darkness, like something out of Cloverfield, those remaining maintained a sporadic conversation.

As dialogue it was after Beckett: the inevitabilities of existence and its accompanying disappointments. Most had attended in the expectation of seeing Kerry’s young guns have a pop but instead Dublin must go on – they can’t go on? – they will go on.

As of Sunday evening, Dublin’s unbeaten sequence was back to 11 successive wins since Kerry beat them by a point in last year’s league final, when a 36-match unbeaten run was halted: that’s one defeat in 48 league and championship fixtures going back more than three years.

Everyone duly noted the lengthy absentee list and the fact unlike during the piecing together of last year’s unbeaten run, none of this season’s matches were being pulled out of the fire at the last minute to secure a draw – as happened a couple of times in 2017.

There is also the suspicion whereas Dublin are tipping along nicely that their main rivals are slipping even slightly. For instance, the champions have already played the other three All-Ireland semi-finalists, Tyrone, Mayo and Kerry, in this year’s league and beaten them by an accumulated total of 21 points.

Last year they only won one of the four league fixtures against the same three counties.

For good measure their most promising challengers in Leinster in recent years, Kildare, who also gave a reasonable account of themselves in the opening league fixture, have slid through the misfortune of a so far winless campaign, almost certain to end up in a quick return to Division Two.

It is though, a bit early to be drawing hard and fast conclusions about what lies ahead. Dublin have always taken the league seriously this decade and more relevantly, have the depth of panel to be able to do so while not suffering a fall-off in results.

Two years ago they arguably – and if so, most unusually – gave their best display of the year in the league final when hammering Kerry. Little over four months later they squeezed out of an All-Ireland semi-final against the same opposition.

Kerry manager Eamonn Fitzmaurice might be in the throes of a necessarily thorough rebuild but in two of his three All-Ireland contests with Jim Gavin, he has created plenty of problems and devised effective power plays that put Dublin under a lot of pressure.

It’s likely that in the years ahead, posterity will judge the league – obviously taken in conjunction with the championship – as the most remarkable thing about Dublin in this era.

Their All-Ireland record has been tightly contested. Seven semi-finals have seen the county run away with only two matches – last year against Tyrone and 2015 against Mayo, which was after all a replay that the latter should have won.

It’s well known Dublin’s All-Ireland final margins are so parsimonious that four out of five wins have been by a point.

Mick O’Dwyer, maybe mischievously but almost certainly in earnest, said this week he wouldn’t consider Dublin a great side “until they hammer a team in an All-Ireland final by seven, eight, 10 points. They’re an exceptionally good team but then they’ve only won All-Irelands by single points against Mayo,” he said – presumably reflecting his own first five All-Irelands as Kerry manager between 1975 and 1981 came at an average price tag of eight points – as opposed to Dublin’s 1.4 in the period in question.

But in the league Dublin have demonstrated the most extraordinary consistency. Under Gavin they have lost six league matches in six seasons to date. Every match is played on its own merits and performance standards as carefully monitored as during the summer.

It’s a record which emerges well even from comparison with the Kilkenny hurlers in their pomp: Dublin’s one defeat in 48 against Kilkenny’s four in 47 during their four-in-a-row years, 2006-09.

There remains the concern that bedevils any team no matter how strong: key, strategic injuries.

There was a ripple of anxiety around Croke Park when Cian O’Sullivan had to be carted off with a shoulder injury. The initial mood music was positive but the Kilmacud player is such a vital cog that a defence, which has managed to get by without Rory O’Carroll and Jack McCaffrey would still be worried by O’Sullivan’s unavailability.

There has been regeneration of leadership personnel: Ciarán Kilkenny, Brian Fenton and Dean Rock are in that category whereas the re-emergence of Michael Darragh Macauley this season must be hugely heartening for the management.

If long-term injury to O’Sullivan would pose serious problems, though, what about captain Stephen Cluxton? His commitment appears relentless and his influence on the team undiminished but his ever-presence means understudy Evan Comerford must cast envious glances at Joey Carbery’s game time with the Irish rugby team.

The facility to survive the absence of key players like O’Carroll, McCaffrey, Macauley and Diarmuid Connolly for most of last year – although his display in the second half of the All-Ireland was crucial – is the hallmark of a consistent, extremely well-resourced team but no one’s immune from a twist of fate.