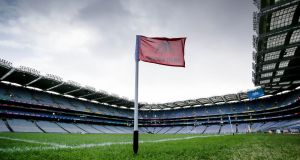 Given the demands of the Covid-19 restrictions and the likelihood of adverse weather conditions, it is expected that the stadium will be in demand during the two-month season. Photograph: Laszlo Geczo/Inpho

Croke Park is preparing for potentially its most demanding schedule since the venue was rebuilt nearly 20 years ago. Stadium director Peter McKenna says that matches will be restricted to three per weekend, once the intercounty season begins as scheduled in mid-October.

This is because of the need to have the pitch in optimum condition for the All-Ireland finals, all four – both football, camogie and hurling – of which will be played in nine days within a fortnight of Christmas.

“This reflects the importance of the last two weekends when the pitch has to be pristine. At this time of the year there’d be no issues but at the end of the year when it’s dark and squally and cold, grass doesn’t grow well in those conditions.”

The 2018 decision to establish a grass farm in Naul in north Co Dublin has also proved timely, as it will provide back-up during what promises to be an arduous timetable.

“It’s been going very well,” according to McKenna, “and that’s key to our winter plans because we will have effectively a replacement pitch, which will be available in the case of any deterioration.”

Given the demands of the Covid-19 restrictions and the likelihood of adverse weather conditions, it is expected that the stadium will be in demand during the two-month season, culminating in All-Ireland finals in the weeks before Christmas.

He says that there will be elevated challenges in maintaining the surface at this unusual time of the year.

“We have done a lot of work with our own pitch team and external consultants just to establish how the pitch will perform in wintertime. The weather is going to be colder, more inclement and the level of sunshine is way down compared to summer.

“We’ve taken it into account when considering how many games we could conceivably have in the stadium and on a particular day, so quite apart from pitch playability and presentation, there’s also the mingling of crowds outside the ground.

“On that basis, we’ve given some guidelines to the CCCC and they are using them in laying out their match schedule.”

There was some controversy over the decision not to stage all three camogie finals on the same day, scheduled to be the day before the hurling final on December 12th. This is because of the demands on the pitch, it was explained.

“A triple header couldn’t be contemplated for two reasons: the mingling of spectators and the impact on the surface. But double-headers will work.

“We’ll be able to do double-headers. We’ve been ‘gaming’ our event-day management plan just to take account of that. If there was a team from the north, one from the south and two from the east – how would that actually happen? What times would people come in or be likely to leave?”

Attendances will also be an issue. There has been much public debate about the Government’s maximum limit of 200 at all matches – “to all intents and purposes ‘behind closed doors’,” says McKenna – but it is anticipated that this will be raised in the weeks to come, depending on the pandemic figures.

McKenna says no decisions will be made until the working capacity is finalised in the next three months.

“It’s hard to be certain at the moment because there are so many variables. When we get a greater sense how big the capacity will be, we’ll have a better idea of how to organise the filling and exiting of the stadium. Croke Park is so big that we’ve a number of different entrance routes.

“There are questions to be answered. When people are seated in clusters, do you measure from the top of the head or the side of the shoulder?” (If you’re puzzled, measure the distance from the top of your own head to the edge of one of your shoulders and multiply that by a few thousand.)

McKenna is on the record as saying that the current capacity, with two metres social distancing, would be about 7,000, but were that reduced to one metre, the limit would go up to around 30,000.

The stadium is there for all provinces if needed during any bad weather, allowing that there is a limit to the number of fixtures given the 10-week window allocated to the intercounty season.

“It’s available and ready to be used and the only conditions that apply will be ensuring the best surface for the finals in December and also that we’ll be guided in everything we do by NPHET.”