Why do units within GAA need to subvert regulations in pursuit of advantage? 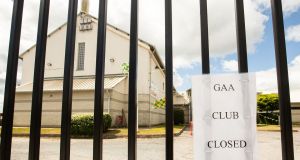 There’s not the remotest chance that county panels aren’t or won’t be up to surreptitious preparations in the absence of official sanctions. Photograph: Tommy Dickson/Inpho

It hasn’t taken long for normal business to resume within the GAA. Less than a fortnight since the publication of A Safe Return to Gaelic Games, initially greeted as a “good news” story in its detailing of how both club and county could get back on the fields, discord is breaking out in little flash fires.

At first the idea of clubs and their 98 per cent of players having first crack at the games after restrictions were lifted, was welcomed as a recognition of what should be the association’s priority.

In practice, however, there are two problems on the horizon. Firstly, the norm in county championships is for them to be played out after the senior footballers and hurlers have exited the All-Ireland.

Under the new roadmap provisions, this will be reversed. Local championships are due to get off the road either completely or to a large extent before inter-county activity gets underway in mid-October.

It’s beginning to dawn on some counties that whereas the usual routine has the virtue of averting the covetous gaze of county managers from players and their club involvement, the proposed calendar will mean conflict between the most important club fixtures of the year and the demands of the county in what is already an uniquely hectic schedule.

Who wins that conflict is open to question in some counties but for the most part it reminds me of the famous Damon Runyon quote: “The race is not always to the swift, nor the battle to the strong, but that’s the way to bet.”

Already there has been controversy over counties deciding to run off quick county championships, as in Wexford and Waterford, both of whom aim to be finished the hurling by the end of August. Reasons for so doing have been advanced, in Wexford’s case by county chair Derek Kent who said that it was to optimise crowds at the more lucrative of the two championships.

Other counties will be utilising the 11 weeks allocated to the clubs more extensively, something that Laois hurling manager Eddie Brennan drew attention to in the Irish Examiner.

Pointing out that he was under strict instruction not to train until mid-September and that some players wouldn’t be available until the end of the month, he told Michael Moynihan:

“That’s okay. I think most managers would feel okay with not being allowed to train until a certain date – provided it’s the same for everybody.

“The GAA has to be very strong with this and proactive.”

No team is allowed to commence collective training until 14th September but will access to players on some lesser level not be an advantage and not be easier when there are no competing club demands?

The problem is exacerbated by the fact that although all suggestions that some county teams are training away in public parks are anecdotal, were actual evidence like video images to be produced the GAA has already said it that does not intend to impose sanctions.

Croke Park’s perspective is that interventions – either to regularise county championship schedules or enforce the roadmap on collective inter-county training – are impractical.

If clubs are unhappy with the schedules they are being handed, it’s up to them to object – so the argument goes. Yet it’s been seen around the country that officials will yield to the demands of county managers, especially if there are prospects of success.

Covert training sessions are inevitable in the absence of sanction and even clubs are currently training in public parks. There’s not the remotest chance that county panels aren’t or won’t be up to surreptitious preparations.

Now for instance if a three-month ban running from mid-October was to be applied to any player caught participating in this type of activity that would be a disincentive.

The GAA actually have the power to make rules through the Management Committee in the current crisis but that’s wishful thinking, as the prospect of the All-Ireland championships being played out before the DRA or in the High Court is not an attractive one given the tautly packed schedules.

Croke Park had hoped that the player insurance scheme being in abeyance might be sufficient deterrent or that the practicality of county boards with literally no resources might make such activities impossible – many county boards genuinely can’t afford their teams until the turnstiles start clicking on club matches.

These hoped-for safeguards now appear as reliable as the Maginot Line.

It can be argued that the GAA is already distracted by getting protocols in order for the return to play or that discrepancies between how county teams prepare are there all the time and the task of regulating that requires an unrealistic level of micro-management.

But there is unfairness at the heart of it all that the association apparently acknowledges it can’t prevent.

Once again though the question has to be asked, why is it impossible for units within the GAA to set aside – even in the current circumstances of adversity and a supposed consequent togetherness – the need to subvert regulations in pursuit of advantage?

This is an immensely challenging year for the GAA as for society at large. Can everyone for once not just behave and get through it with as little friction as possible?