Seán Moran: Could coronavirus give the GAA a chance to take stock and reset?

A truncated 2020 Championship has pragmatic appeal but also financial drawbacks 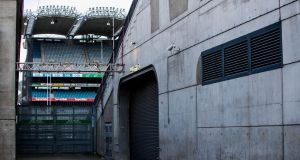 A closed Croke Park after Irish sport was brought to a halt by coronavirus. Photograph: Ryan Byrne/Inpho

The material damage of what’s happening in the country is all around us in the health implications for so many, as well as the collapse of economic activity and its consequences for employment.

There are also mental and psychological impacts from such catastrophe. Sport may be peripheral in times of crisis but it’s one of the many strands of normal life that become disrupted or in this case discontinued.

The resulting absence of normality makes life harder to bear for large numbers of those interested and who are already feeling stressed in the present and anxious for the future.

This hits particularly hard for an organisation like the GAA, which is integral to so many communities through its clubs whose activities are far more day-to-day operations than the incidence of big matches and national competitions.

The jolting new reality was illustrated by GAA director of communications Alan Milton when speaking to RTÉ Radio on Tuesday about the use of Croke Park as a drive-in centre for those referred for coronavirus testing. He reflected on how 12 months previously nearly 20,000 people rather than a line of cars would have been in attendance at the stadium for last year’s club finals.

Concerns within the association have graduated from wondering how the season’s activities can be saved or accommodated to a fatalism that everything will be tossed in the air and the aftermath coped with as best can be managed.

One aspect of the challenges facing the GAA that might appear surprising is the idea that when things settle and we get out the other side of the daunting current difficulties, there might be an opportunity to ‘reset’ and pass considered judgement on where the association is going.

This might be partly ascribed to an understandable desire in days of crisis to revert to simpler times but it also catches a mood at a point in the GAA’s history when unease - and like all unease, frequently intangible - has become commonplace.

This century - now, unbelievably, 20 per cent done - has featured a number of flashpoints in the Gaelic games community, all to do with the conflict between tradition and new approaches to administration and governance.

Back in 2000 the widespread expansion of the inter-county championships began with the decision of that October’s special congress to introduce the qualifiers to the football championship. There was opposition from traditionalists to the effect that a dilution of the old sudden-death format would undermine the All-Ireland by having Sam Maguire available to beaten teams.

This was extended to the hurling championship a year later.

Croke Park was completed with its tier of corporate suites that also upset traditionalists in its commercialism and when in 2005 when the stadium was open to rugby and soccer pending the redevelopment of Lansdowne Road, the most blistering criticism came from former president, the late Con Murphy: “We are supporting the creation of a new association that caters for everything and stands for nothing”.

The move was predicted to herald the end of amateur status, as hurlers and footballers wouldn’t stand for not being paid when professional players were earning money on the same pitch.

There’s no need to revisit every flashpoint but as the century unfolded they regularly arose: the GPA and its Government grants, health and safety at grounds, the arrival of subscription television for championship matches, the ongoing dysfunction of the club-county interface, which prompted the rise of the CPA, the adoption of round-robin formats in the Sam Maguire and MacCarthy Cups and even up until last autumn’s establishment of a graded football championship.

That latest change with its corralling of Division Three and Four counties into a separate All-Ireland championship, the Tailteann Cup, once their provincial involvement is over, is a likely victim of circumstances and is considered unlikely to debut this year but already the scramble had begun with staying out of Division Three becoming as frenzied a motivation as climbing on the last helicopter out of Saigon.

That there has been a change is detectible in the reluctance of Croke Park to plan any contingencies on the basis of infringing on club fixtures’ territory - be it April, which already looks a long shot anyway or the remodelled late summer and early autumn.

There is common sense here because club fixtures will be require their own drastic fixes regardless of how the inter-county dilemmas are resolved.

It is more and more frequently heard that the championship could temporarily consider the restoration of knockout schedules. Everything depends on how long it takes the HSE to conclude that the pandemic has peaked but a simplified calendar is very much on the cards this summer.

Is it possible that the GAA community may look at old-style knockout provincials leading to four All-Ireland semi-finalists and decide that this lack of complication has its long-term as well as immediate, pragmatic appeal?

Wouldn’t rolling back the inter-county championships create more time for clubs, reduce the demands on inter-county players and the staggering costs for county boards?

They probably would but yearning for the past comes at a price. It is 24 years since the football and hurling championships eliminated teams as they went with no second chances.

Back in 1996, with coffers swelled by the Meath-Mayo All-Ireland football final replay and the rise of Wexford hurling, the combined (index-linked) revenue from gate receipts and broadcast fees was in the region of €13 million or roughly a quarter of what was taken in last year, just over €50 million and that doesn’t include commercial earnings, which are realistically also tied to fixture opportunity.

A truncated championship summer may well provide a fascinating glimpse of the past but does it really map out an alternative path into the future?