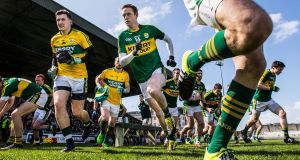 Part of Colm Cooper’s genius was turning what might have been competitive matches into emphatic triumphs. Photograph: Cathal Noonan/Inpho

There was no real doubt about it in the end. It’s just over two years since Henry Shefflin called a media conference to announce his retirement and beforehand there was a genuine belief in some quarters that he might decide to stay on in some capacity with Kilkenny.

In Colm Cooper’s case the surprise would have been had he opted to stay on and give it another year. Like Shefflin, he had the cover of a successful All-Ireland club campaign to camouflage his intentions but listening to him speak at the last big media conference he gave, last November, before the provincial club finals there was a sense that beyond his ambitions with the club lay no hard and fast plans.

There had also been plenty of more recent rumour and anecdote to the effect that he might find immersing himself in the rigorous protocols of intercounty training for a 15th season – he missed out in 2014 because of serious injury – unappealing.

The big meeting with Kerry manager Eamonn Fitzmaurice the week before last is said to have centred on the extent to which Cooper had regained his appetite for it all and what precise role he might play in the county’s plans.

“If maybe the hunger is not there,” he had said last November, “or my body doesn’t feel . . . because the commitment now is drastically different to when I started.

“It’s a huge time commitment, you’re putting your life on hold, everything goes into preparing your body and I suppose when you’re over 30 and you’ve had a few injuries as well, you need to give it a little bit more. Those are the main factors and we’ll make the decision when the time is right.”

There has also been plenty of other straws in the wind. Dr Crokes won the All-Ireland club title that he had so ardently pursued over the years since watching his brothers win the club’s first in 1992.

But there was also heavy symbolism. For a player whose career had run on spell-binding technical mastery of the ball, he found himself in the age of tactics and deep defence and the imperative to track back – there had been no more vivid metaphor of this trend than Cooper valiantly chasing down Dublin corner back Philly McMahon in the 2015 All-Ireland final at the end of which he had been out-scored by his marker.

Part of what made him so popular as a player was how normal he was as a person. Competitive and disciplined, he never made any secret about his wish for a social life

Perhaps grasping the zeitgeist in the urgency of his club quest he not only scored the goal that ultimately defeated Slaughtneil on St Patrick’s Day but also orchestrated the calculated playing down of the clock in the last four minutes of the final.

It marked a different world to 25 years previously when he first walked onto Croke Park as an eight-year old club mascot for the final against Thomas Davis. Peter O’Brien, the club goalkeeper who had first nicknamed him the Gooch (after “a foxy cartoon character”) saw young Cooper joining in the kick-around.

According to club member John Keogh, O’Brien became testy. “He gave out to him because Cooper was undermining his confidence – one shot in the top corner, another in the bottom corner. So he told him to get off the field and stop undermining him. Eventually, the stewards arrived and took him off when he was trying to join the team parade.”

Part of what made him so popular as a player was how normal he was as a person. Competitive and disciplined, certainly, he never made any secret about his wish for a social life. A star in football’s biggest firmament from the age of 19, he effectively signed away his young adulthood to place his gifts at Kerry’s disposal.

In a striking insight in his memoir, Keys to the Kingdom, former Kerry manager Jack O’Connor is being driven through Killarney by his wife late one night in 2004 after a wedding. He observes the nightlife.

“Young ones and guys sitting on the pavement, chatting each other up and drinking. I said to myself, how the hell does the Gooch keep his head in a town like this all summer long?

“This man is a superstar. He’s supposed to be at home in his bed while Killarney is partying. It’s a huge demand on a young lad.”

He bore the demands and dedicated himself to football, coping with the early deaths of his father and one of his closest friends.

Colm Cooper was part of the Kerry continuum. It’s a county where there’s no great purpose in counting out your medals because there are hundreds of them all over the place. Great players are great contributors to the county tradition and only the greatest get to stand out in their generation.

Everyone with an interest in Gaelic games knows who he is. He shone in a time of plenty for the county. He rolled with his share of mean-spirited punditry but behind the “soft All-Irelands” was his genius at turning what might have been competitive matches into emphatic triumphs during the third most successful era in Kerry’s glittering history.

Posterity will deem his football extraordinary. Right now, he well deserves to slip into a more ordinary existence.