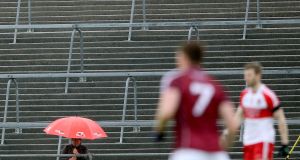 A fan looks on from the terrace during the Round 3B qualifier between Galway and Derry at Pearse Stadium in July. Photograph: Inpho

When we look at the intercounty championship structures, the idea of natural selection rather than intelligent design suggests itself, but there were good reasons for the provincial championships evolving as they did.

Transport economics, the commonsense focus on local rivalries and consequently more manageable administration may have been the most obvious but these days the consensus is that those justifications have become unequal to the criticisms directed at the format.

The most obvious one is the disparity in what’s required of counties depending on their provincial championship. Donegal for instance played four Division One teams before getting knocked out in the quarter-finals; Dublin played two and won the All-Ireland.

It’s possible to make an argument that attitudes changed with the introduction of the qualifiers in 2001. The new blueprint meant that a national competition was running throughout the summer, parallel to the provincial championships.

Originally the provinces were the equivalent of national federations sending their best teams to enter a representative competition. You could argue – and many in Ulster did – the unequal depth of competition had an impact on the All-Ireland championship but at least four provincial winners went into August to play their peers and barring replays, each county had two matches to win the Sam Maguire.

Under the qualifiers system however, teams were criss-crossing the country playing counties they had never played before and there could no longer be any pretence that the championship was still a sequential combination of local and national competitions rather than essentially a national event.

Yet the logic behind the provincial championships hasn’t disintegrated in the face of modern realities. It’s still there in that it bank-rolls the provincial councils, which remain an important vehicle for the GAA’s national administration.

The significance of the provincial championships as an interim goal for counties that are never going to win the All-Ireland remains, and is arguably even stronger, despite ominous evidence that strong counties now see winning their province as a convenient stepping stone to the ultimate prize.

That has been the evidence of the past five years. Will it continue to institutionalise winners and losers? Probably not, as the dominance of Kerry, Mayo and Dublin is at least facilitated by the failure of counties like Cork, Galway, Meath and Kildare to optimise their challenge. It’s true that the chances of replicating great provincial breakthroughs like Westmeath and Laois in the last decade and Leitrim and Clare in the 1990s look remote, but they always were.

Westmeath had never won the provincial title and the other successes came after intervals of 57, 67 and 75 years respectively. In other words, even under the old system those buses wouldn’t have been due again for a while yet.

The Gaelic Players Association is the latest body to make proposals about the future of the football championship. The ideas published last week are thoughtful and carry the additional weight of having been synthesised by intercounty players, who operate in the championship.

One interesting element that wasn’t hugely prominent in the launch was the disclosure that players with lower-ranked counties do not favour graded competitions, such as the old Tommy Murphy Cup. Of course we probably knew that already given the insipid response of many players to that competition even when it was getting decent-profile Croke Park finals.

It may be possible in the future to implement plans to make the championship more exclusive but there doesn’t appear to be an appetite for that at present.

Central to the GPA plans is a streamlined season with a structure that gives counties the same number of hurdles to jump on the championship course. That was also a feature of last year’s second report of the Football Review Committee, which came to nothing having proposed shuffling spare counties around the provinces to create four ‘conferences’ of eight counties.

The GPA proposal suggests a structure of eight fours or to give it its usual description, the ‘Champions League’ format. Anything to do with round-robin matches though prompts misgivings.

GAA Director General Páraic Duffy raised his own concerns in the 2010 annual report: “The effect of ‘round-robin’ groupings when used at club level, has been to diminish interest in the earlier rounds of competitions and to have a severely negative impact on attendances.”

Neither does this happen just at club level. When the All-Ireland hurling qualifiers of 2005-07 were conducted on a round-robin basis, despite the presence – in various years – of Galway, Dublin, Offaly, Waterford, Clare, Limerick, Tipperary and Cork the average attendance over the three seasons was 5,202.

Famously Cork-Tipperary in 2007 drew just 12,833 whereas in the championships on either side of that year the Munster championship fixtures between the counties were attended by 53,076 (2006 Munster final) and 42,823 (2008 Munster semi-final).

The problem is exacerbated by dead rubbers. For instance Dublin and Offaly played in Round One in 2006 with 5,124 in attendance but in 2005 and ’07 when they met in Round Three when both were out of the running in the group the ‘crowds’ were 218 and 310 respectively.

Football also experimented with the format in 2000, the season before the qualifiers were introduced when Leinster – in an innovation floated again this year – conducted its early rounds in a round-robin format. The counties involved were Wicklow, Carlow, Wexford and Longford and the attendances averaged 1,780.

Similar pairings (Wexford-Longford in 1999 and Carlow-Wicklow in 2001) played in the years immediately before and after 2000 drew crowds that doubled and trebled the ‘round-robin’ format.

Given that we already know qualifier crowds are smaller than provincial championship attendances between the same counties, the GAA might be well advised to leave the Champions League to soccer.