Seán Moran: Anxiety is about to take over a relaxed summer 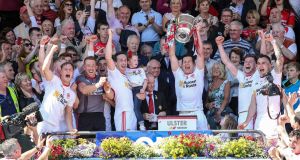 Sean Cavanagh lifts the cup after Tyrone win the Ulster championship. Of the four provincial champions, only Tyrone had to play a Division One team along the way. Photograph: INPHO/Presseye/Philip Magowan

Now that the provinces have closed for business, it’s timely to reflect that the football championship has become like Russian roulette. Provincial champions this summer have made their way through the early weeks knowing that the chances of the chamber being loaded have been tilted in their favour.

Yes, Galway got unlucky but there is that danger in a Connacht championship with three winners in as many years.

The anxiety at the top end of the championship is stimulated by the fact that none of the three frontrunners, Dublin, Kerry and Tyrone, can be certain when playing each other whether the chamber is loaded. There will be no finding out the true extent of weaknesses in the team until they prove fatal.

One of the obvious trends emerging from the first half of the championship is that the elite counties have strengthened their hold after a couple of years of slippage – perhaps significantly in the light of next year’s introduction of a round-robin format at the All-Ireland quarter-final stage.

The picture isn’t yet complete as the final round of the qualifiers has yet to conclude, but all four provincial champions this year played in Division One of the league even though Roscommon were relegated.

Three other counties from the top flight have been kept apart by the draw and all are favourites to advance, leaving just Cavan, who were also relegated, as the only county from the league’s top eight to be out of contention.

This may appear an unexceptional statistic but it’s not, and for the past three years the number of Division One counties in the All-Ireland quarter-finals have been four, six and four respectively.

More interestingly, the path to provincial success has been fairly undemanding for all the winners.

The average margin of victory in the provincial finals was just under 10 points, and all four defeated finalists were from Division Two, including the two, Galway and Kildare, who won promotion.

The four counties’ average margins throughout the championship have also been imposing: Dublin (17.3), Roscommon (13), Tyrone (9.3) and Kerry (8.5). Of the four champions, only Tyrone in Ulster had even to play a Division One team along the way, and they resoundingly beat Donegal.

The significance of these figures is simply to emphasise that none of the current quarter-finalists have yet been tested to the point where their credentials can be definitively judged.

As things stand Dublin have the advantage of simply having won so much in recent times that they have the winning experience of playing in tight matches. Unusually for serial champions they have been involved in a succession of cliff-hangers at the sharp end of the championship.

During the four All-Ireland winning campaigns this decade, Dublin have played 10 semi-finals and finals, including two replays, and in only two of those matches has the margin of victory been more than a score.

Despite an unprecedentedly uncompetitive era in the Leinster championship, Dublin have been able to go up the gears when outside the province and survive tightly contested encounters, slipping up just twice to date in the record breaking seven-year run.

More strikingly, the team has been refreshed this year to a dramatic extent. As has been mentioned previously only two of the starters last Sunday also lined out against Wexford in the first Leinster win of the sequence in 2011.

As a comparison, the last team to achieve seven provincial titles in a row was Mick O’Dwyer’s Kerry (they added an eighth in 1982) but in the 1981 Munster final against Cork, eight of the players who had started the 1975 provincial final against the same opposition lined out.

There will be tweaks and additions by Jim Gavin as injuries clear and suspension expires. It has been noticeable that around the middle of the field Stephen Cluxton does not have the long option of the suspended Diarmuid Connolly or the injured Paul Flynn when kicking out.

It is also true that Cian O’Sullivan is more effective as a sweeper than an out-and-out man-marker, and that with Tyrone seeded to meet Dublin in the semi-finals there is the history of struggling with top-class defensive systems.

As Jim McGuinness pointed out in these pages, Tyrone are also playing with the flow of a confident team – a confidence built in painstaking increments and all the steadier for that. Their defence is now supplemented by a high-performing attack.

Kerry have cracked the Dublin glass in Croke Park, winning a knock-out match against them for the first time in eight years last April. They now have a league trophy that had almost become an heirloom in Parnell Park, and pricelessly a fit again James O’Donoghue in the country’s most formidable full-forward line with Kieran Donaghy and Paul Geaney.

Unbeaten teams always carry an element of risk into the All-Ireland championship but they have found a way for the past six seasons.

It’s just a question of who will be the last to hear a click.