Seán Moran: All things must pass – even Dublin’s dominance 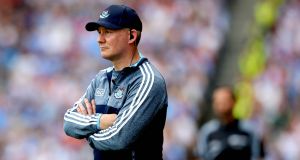 On the upper deck of the old Hogan Stand just before the replayed NFL final of 1988, there was the customary good attendance of Meath supporters. Shortly before throw-in a large gentleman made stately progress down the steps and, unaccompanied, squeezed his way down one of the rows towards an isolated, empty seat.

He had an impressive red beard and was beaten into a stretched replica jersey – not at the time as commonplace as they are now. Around his shoulders, worn like an imperial cape, was a large blue flag.

Naturally his entrance drew pantomime boos from the rival ranks. As they reached a crescendo, he stood up again from his seat, turned to face his raucous audience with arms spread out and declaimed: “Welcome to our capital city.”

On the field, Meath also made themselves welcome and won rather easily. That was Dublin 30 years ago: mock-heroic bombast and good for a laugh. Despite their presence hovering around the top table there was, by and large, little fear of being beaten by them in matches of consequence – a state of affairs temporarily suspended in 1995 but swiftly re-imposed.

The laughter now is of a strictly nervous nature.

It was striking when reviewing the coverage of the last four-in-a-row Sam Maguire run, by Kerry 37 years ago, the extent to which it was also treated unenthusiastically.

It’s no surprise that such would be the case. For all the talk about how poor a spectacle football has become and especially in comparison to hurling, people generally attend matches when they think the contest will be competitive, and that was missing this year because Dublin’s closest adversaries, Mayo and Kerry, had regressive years.

There is anxiety over the poorest semi-finals attendance in eight years and the lowest of any year featuring Dublin in the last four since the new stadium was built. Anecdotally there was less pressure on tickets for the final and reports of empty seats despite the “full house” notice that is now vaguely displayed instead of specific attendance figures at finals.

It’s a wistful reminder to Jim Gavin and his team that great sides are more admired in retrospect than at the time.

No one views the future with 20:20 vision, but it is possible to disagree with the certainty of views which see Dublin dominating the landscape for years to come. It was noticeable in Sunday’s match programme that the bench, which is such an important part of the champions’ in-game artillery, is beginning to age.

Seven of the 11 replacements are now 30 or older (average age 31) and they supplied four of the six subs used in the final. Three of the back four are also into their 30s.

Gavin has been really successful at bringing on younger players to rejuvenate the team: since the four-in-a-row began in 2015, Brian Fenton, John Small, Niall Scully, Con O’Callaghan and this summer Brian Howard and Eoin Murchan have all been introduced in successive years.

There is, however, a difference between incorporating younger players into a thriving team and bringing them in to replace retiring great players – a distinction currently appreciated in Kilkenny.

The renewal procedure hasn’t been an outlier in historical terms, either. Of the other four-in-a-row sequences in history Mick O’Dwyer’s Kerry had by far the greatest continuity, with just 17 players starting the finals between 1978 and 1981.

There is also the question of management. Jim Gavin is now the county’s most successful manager with five All-Irelands as well as an extraordinary record of sustained success during the league, with just seven defeats from 52 matches in six campaigns.

He has been tactically outwitted just once in six championships and otherwise has developed new players with an unerring eye for talent. His appointment has one more year to run and, should he decide to call it a day, five-in-a-row or not, the task of adequately replacing him will be unenviable.

Maybe the roof is about to fall in on the whole inter-county system with its obvious discrepancies between a metropolitan area with a population of 1.3 million and rural counties with about 5 per cent of that, but that’s the system.

Apart from 20 years around the turn of the 20th century when Dublin corralled 11 All-Irelands, the disproportion hasn’t been seen to compromise the competitiveness of the championship. Even with the county’s greatest decade since then in full spate, its place in the roll of honour remains a distant second, nine All-Irelands – which is as many as Galway have in third place – behind Kerry.

Perhaps that 130-year equilibrium has been disturbed but, on the available evidence, it’s hard to be definitive.