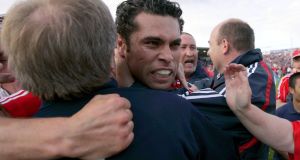 Former Cork hurling captain Seán Óg Ó hAilpín has expressed regret for things he said during the players’ strikes in the county back in the 2000s. Speaking on RTÉ’s Sunday Game, the three-times All-Ireland medallist also spoke about the “casualties” of these disputes, especially the one involving 2008 manager Gerald McCarthy.

There were three separate strikes in 2002 and two in 2008/09, involving both footballers and hurlers. The first was in protest at the resources given to the county hurlers whereas the others were directed at Teddy Holland’s appointment – he eventually withdrew – as football manager and subsequently at McCarthy, who resigned.

“The worst one was in ‘09,” said Ó hAilpín, “probably the one that there is still an aftermath to this day over. The biggest casualty out of that was Gerald McCarthy, probably one of – if not the greatest – of the Cork greats having to step down.

“That’s 12 years on and there’s not a day goes by (but) I think back to then, if things could have been done differently.

“There are certain actions, in hindsight – I can’t speak for the other players per se around that time but I know myself, I would have said some stuff that time – that maybe with proper reflection, I was probably best to just keep my mouth shut.”

That dispute was extremely rancorous and featured a public exchange between him and McCarthy in November 2008.

Ó hAilpín expanded by saying that the players and the county board had embarked on a collision course at that time and the outcome, which proved hugely divisive in Cork, had been inevitable.

“We were two poles apart completely and when you have two camps entrenched in their own beliefs it was only going to lead to ringside tickets in Las Vegas because the aftermath was filthy, callous, it was cold.”

He also regretted the departure of a previous manager, Bertie Óg Murphy, who stepped down as a result of the 2002 strike.

“Unfortunately with these controversies there are casualties. Bertie Óg Murphy had to step down as manager along with his selectors and then on reflection that’s one thing I do regret – the casualties and the fact that people had to step down.”

Sebastian Vettel: This Formula One season could be my last 19:17
French Open set to allow 60% of capacity crowds in September 17:55
Tactical test awaits Dettori and English King from stall one at Epsom 16:09
Six to go forward for Aidan O’Brien in Saturday’s Epsom Derby 15:15
‘Several’ players have withdrawn from snooker World Championship 13:48