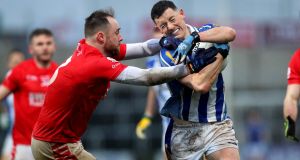 Consensus on anything is hard to find in the GAA this weather, except it seems when questioning the sense in playing the AIB All-Ireland club semi-finals on the first weekend of the new year.

For the players at least it’s certainly understandable, given it places a sort of curfew on their Christmas. With those semi-final line-ups now complete, Ryan Basquel is the latest player to wonder how his club Ballyboden St Endas will cope with it all.

“Just the way the fixtures are this year, it comes around so quickly,” said Basquel, the team captain who kicked one of the late and decisive scores to see the Dublin champions, overwhelming favourites, eventually get past Carlow champions Éire Óg. His point was one of three in as many minutes to turn a one-point deficit in the 55th minute into their second provincial title, four years after the first, played in vicious weather at Portlaoise.

“Personally, I think it’s much better when it [the semi-final] is February and March. It’s just way too cramped. I’d understand if it was all done before Christmas. But sure we’ll enjoy this and then we’ll see what happens after that.”

Ballyhale’s TJ Reid and Colin Fennelly also questioned the timing of the semi-finals, Fennelly suggesting “it will make for a short Christmas, it probably even feels like you don’t even have a Christmas”.

For the club and county player in particular, when Christmas may well be their only break all year, it’s particularly questionable: “TJ Reid said it the last day,” added Basquel. “He’s an inter-county player and I’m a club player and I don’t think it should be the way it is. I don’t see the sense of it being played in January. But we’re just delighted to be there and whenever we have to play, we’ll play it.”

Indeed the nature of Ballyboden’s win on Sunday means they have to be thankful for Basquel’s point coming just before the coup de grace was added by Dublin’s Michael Darragh Macauley.

“I was going to get lynched if I didn’t score that one! We’ve done the work all year. You have to keep backing yourself and if it’s on, you take it on. Warren Egan came off the bench and he kicked an unbelievable score to level us. That confidence went throughout the team and then thankfully, I got the next one.

“The first half was incredibly difficult. Just rain, wind – gale force against us in the first half. So I think we did incredibly well just to go in at 0-3 to 0-3. They were the toughest conditions I think I’ve ever played in.

“We probably could have done a few things better in the second half. That’s just the nature of these games and winter football. Sometimes 10 minutes can go without you thinking about it. But we stayed at it. We got eight points and three of them in the last two minutes.

“So we know it’s going to go down to the wire and you’ve just got to keep playing in those crucial minutes. That’s why you train.”

The Dublin county board, meanwhile, are still aiming to have their new manager in place by this Thursday, with either former selector Declan Darcy or Dessie Farrell still considered the most likely to succeed Jim Gavin.