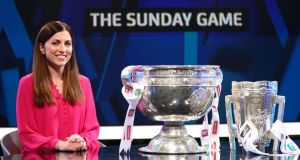 RTÉ have announced their Sunday Game schedule for the summer of 2019, which is hosted by Joanne Cantwell. Photograph: James Crombie/Inpho

RTÉ’s line-up of live televised GAA matches this summer reaffirms the clear shift in coverage to the more elite end of the championship and away from the smaller provincial football matches.

It means All-Ireland champions Dublin, seeking a record fifth successive title, won’t be seen “live” on television until the Leinster football final, presuming of course they get that far.

Like last year, RTÉ are limited to just 31 games in total across hurling, football and camogie, and for 2019 will include nine Munster hurling games in the new round-robin format, plus three from Leinster.

Despite the revamped formats introduced last year - with eight extra football games in the Super 8 stage, plus the two round robin provincial hurling championships - the number of live TV matches was again left unchanged at 45.

RTÉ has exclusive rights to 25 games (31 in total), Sky another 14, with six more “shared”: the All-Ireland semi-finals and finals in both codes; this deal is in place until 2021 and isn’t expected to change until after that.

Sky’s sixth season of championship coverage on its pay-per-view platform, announced last week, also focuses more exclusively on hurling and the latter stages of the championship, while largely avoided the opening rounds of football across the four provinces, with the exception of the Cavan-Monaghan Ulster quarter-final on May 18th, plus the Mayo/New York against Roscommon/Leitrim Connacht semi-final on May 25th.

Last year was the first time since 2006 that Dublin’s opening game was not covered; this shift away from the provincial football championships is especially evident in Ulster, although BBC Northern Ireland does have the rights for deferred coverage on the BBC’s iPlayer.

The RTÉ live coverage begins on Sunday week, May 12th, with a Munster senior hurling double bill of Waterford against Clare from Walsh Park (throw-in 2pm) and Cork against Tipperary from Páirc Uí Chaoimh (throw-in 4pm).

RTÉ Radio 1 also has the full exclusive national coverage of every match in both hurling and football with commentaries featured on both Saturday Sport and Sunday Sport.

The live championship action on radio throws-in this Sunday with full live commentary on Sunday Sport of Mayo’s trip to New York to take on the hosts in Gaelic Park in the Connacht Senior Football Championship quarter-final; there will also be live reports from the day’s other Connacht Football quarter-final as London face Galway.

Despite the added games, new GAA director-general Tom Ryan last year confirmed the current TV deal was staying. “We’re going to stick with the existing structure of things. We’re happy with how the arrangement has worked up to now and we’re not looking at changing the nuts and bolts of the arrangement until that comes up for renewal.”

Last week, Sky announced three-time Kerry All Star and four-time All-Ireland winner Kieran Donaghy as the new addition to their broadcast team; Sky’s exclusive coverage gets underway on Saturday May 11th when Brian Cody’s Kilkenny take on Mattie Kenny’s Dublin in the opening round of the Leinster Senior Hurling Championship in Nowlan Park.