RTÉ reveal Young Sportsperson and Manager of the Year nominees

The RTÉ Sport Awards 2020 will be held at the end of the month, live on RTÉ One 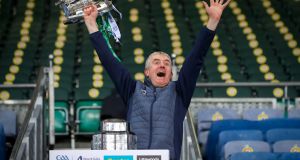 Limerick hurling manager John Kiely is among the Manager of the Year nominees. File photograph: Inpho

RTÉ have announced their nominees for the 2020 Young Sportsperson of the Year and Manager of the Year awards.

The Young Sportsperson of the Year nominees include Cork teenager Aaron Hill who pulled off a sensational victory over six-time world champion Ronnie O’Sullivan at the European Masters.

Kildare boxer Katelyn Phelan who got the better of the previously undefeated German Jessica Schadko in Munich to claim the WBC youth title, as well as the WBF and WIBA belts in the welterweight division.

Among the Manager of the Year nominees, Brian Dowling led Kilkenny to their second camogie All-Ireland title since 1994. Dessie Farrell’s Dublin football team won their sixth All-Ireland title in a row, his first in his maiden season.

While Limerick hurling manager John Kiely is also nominated after his team went through the year unbeaten- winning back-to-back league and Munster titles, as well as regaining the Liam McCarthy Cup they last won in 2018.

While Stephen Bradley oversaw a first Premier Division title for Shamrock Rovers since 2011 with four games to spare.

The nominees for RTÉ Sport Team of the Year will be announced in the coming days.