Róisín Leonard leads Galway in win against Tipperary in Tuam 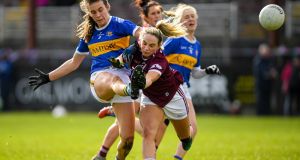 Galway are back on top of the Lidl Ladies National Football League Division 1 table after Roisín Leonard led them past Tipperary in Tuam Stadium, shortly after Cork stumbled against Donegal in Ballyshannon.

Dublin eased their relegation concerns with a come from behind win away to Waterford, while Mayo kept pace with the leaders following their convincing home win over Westmeath.

Galway raced into a 0-3 to 0-0 lead early on with Fabienne Cooney, Ailbhe Davoren and Andrea Trill on target. They were four clear at half time, while a penalty from Roisín Leonard in the 37th minute made sure of the 1-12 to 0-4 win for Tim Rabbitt’s side.

In the northwest, goals from Amy Boyle Carr and Geraldine McLaughlin saw Donegal recover from last week’s loss against Westmeath as they inflicted a first loss of the season on Cork, who slip into second place on scoring difference.

Orla Finn kicked six points for Ephie Fitzgerald’s side, but they were edged throughout by a hungrier Donegal side, who climbed out of the relegation slot with this 2-6 to 0-8 win.

In Dungarvan, TG4 All-Ireland champions Dublin stormed back from seven points down to deny Waterford with goals from Siobhán Woods, Noelle Healy, Carla Rowe and Sinead Aherne key to this 4-5 to 0-13 win.

Five Kellyann Hogan frees and three Róisín Tobin points left the hosts 0-12 to 2-2 ahead after 40 minutes before Bohan’s side struck 2-3 without reply to pick up their second win of the competition.

Elsewhere, an outstanding performance from Rachel Kearns propelled Mayo to a 0-10 to 2-0 victory over Westmeath in Swinford.

Lucy McCartan and Leona Archibold hit the net for Sean Finengan’s side, but Mayo were always in control against the Leinster outfit and are firmly in contention for a spot in the decider now.