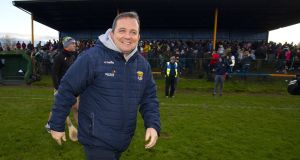 Though the GAA’s announcement that there would be no intercounty games until October came as no great surprise to anyone, it’s fair to say the clarification has not been met with across-the-board approval. Wexford manager Davy Fitzgerald, for one, was disappointed to see that pitches across the country are to remain closed for the foreseeable future, stressing that there is a mental health dividend to be gained from opening them up on a limited basis.

“Look, health is number one,” Fitzgerald told The Irish Times. “That has to come before everything. If we end up not playing any games this year because the health side of it says so, I’m absolutely fine with that. But there’s a mental health side to things as well and we really need to watch out for it. In my club and with the county, there are lads bursting to get out and train together in small groups, three or four just looking to go down to the field together and puck away. But this is saying they can’t do that until the end of July.

“I just think it’s a disappointment that parks can be open and the government say it’s okay for people to exercise away but the GAA won’t trust their players to be able to go into the fields in groups of threes and fours, keep their distance and do their bit of training together. I would actually trust them to do that.

“It’s not about getting back to play games, that’s not what I mean. But from a mental standpoint, allowing players to come back together in small groups and keeping to the guidelines put down by the government, I think that would be a big help to a lot of people. I don’t think it’s a big lot to ask for, for a month or two to let them do that.”

For Waterford manager Liam Cahill, the news changes relatively little about the coming months. Cahill had looked for clarity in recent weeks as to what the rest of the year might look like and had taken the GAA’s reluctance to make any public pronouncement as a sign that there would be nothing to cling to in the short or medium term. And so it has turned out.

“I would have personally had a feeling that that sort of a timeframe would be what we’re talking about,” Cahill said. “Easy say it now, I suppose, but I just thought that because there wasn’t a whole lot of direction coming early on, it could only be because they were thinking of something longer-term. In fairness to the GAA, as much as we all like to give out, they did state early on that they would be guided by the HSE and government guidelines and they’re being true to their word here, to be fair.

“The summer is gone and at least we know that now. For the last while there was all different types of presumptions out there about what might happen. At least now there is clarity that if anything is going to happen from an intercounty perspective, it won’t be until October. Players can put their minds at ease and gauge their plans to work towards that date. Hopefully it happens then.

“And if it doesn’t, another few months and start against next year might be the way to go. There’s no guarantee it will be safe then either. But at least by then we will have a little more knowledge about what’s going on with the virus and we’ll be able to get back to some sort of normality in time, or be able to manage it properly.

“About a week and a half ago, we made the decision to leave the players off until July anyway. We felt the timeframe was going to take us up to that at least and we wanted to take away the accountability of having to get this training done or that training done and leave them have their lives. We didn’t want them feeling they had to live up to any regimental craic from us in the middle of all this, on top of everything else. It was as good a time as any to let fellas taper back a bit. We’ll reassess that as we go along.”