Minister should step in as constituents are ‘suffering from withdrawal symptoms’ 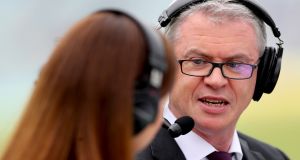 Joe Brolly’s contract with RTÉ was not renewed at the end of 2019. Photograph: James Crombie/inpho

A Clare County councillor has brought a motion calling on the Minister of Communications to step in and get Joe Brolly reinstated to the RTÉ panel. Gerry Flynn (Independent) has put an item on the agenda for next Monday, February 17th and has described himself and his constituents as “suffering from withdrawal symptoms” since the former Derry All-Ireland winner has left the national airwaves.

“I have put forward the motion and I have got a couple of my colleagues from Clare County Council to co-sign it,” Flynn told The Irish Times. “I am a sports fanatic and I am suffering from withdrawal symptoms since he was removed from the RTÉ panel. He was a fantastic guy – I loved watching him play the game and I loved watching him analyse it.

“Where I’m coming from, maybe it’s PC gone mad, I don’t know. But I think RTÉ are basically sterilising all analysts now into a position where it’s scripted and it’s taken away from the enjoyment of the game. I’m only giving you this from the point of view of my constituents and my good self.”

Brolly’s contract with RTÉ was not renewed at the end of 2019 after a rift between himself and Head of Sport Declan McBennett came to a head after the drawn All-Ireland final last August. Brolly was not retained in his habitual spot on the live broadcast for the replay and has since joined subscriber channel Eir Sport.

“It wasn’t just the punditry,” explained Flynn, who is in his fourth term as a Clare county councillor. “He was entertaining and he was knowledgeable as well. For a state broadcaster that is funded by public money to be carrying on like that, I wouldn’t be happy with it. So I decided to put the motion to Clare County Council and it will be directed towards the Minister for Communication and the Minister for Finance.

“At the end of the day, RTÉ receive state funding. The outcome I’m hoping for is that my colleagues support it and it becomes an active motion and it will have some bit of value going forward. If it is passed, I am hoping it will be circulated to all other councils in Ireland as well, just to let them see that we are serious. I am an independent member of the council and when I put something forward, it has meaning behind it.”

Flynn confirmed that he had not previously put a motion to the council relating to a television show.

“Not necessarily, no. Most of what I’d be putting forward would have to do with the provision of services or funding from the government. I like to think that when I’m putting something forward, it has troubled me a lot. And this has troubled my constituents. I am duty-bound as a councillor that if constituents are coming to me and saying they didn’t think it was a good thing to do, the best thing I can do is put it forward and get it to a minister and let it land on the desk of RTÉ.”