Páraic Duffy: Second stadium for Dublin not a priority 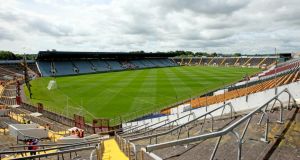 The redvelopment of Páirc Uí Chaoimh is a a priority for the GAA before they consider a second stadium in Dublin.

The GAA’s Director General has poured cold water on the notion of the association building a medium-size stadium on the outskirts of Dublin. Speaking last week, association president Liam O’Neill had endorsed in principle the idea of a Leinster provincial venue, albeit without specifying a timeframe.

“I don’t want to be seen to contradict the uachtarán,” said Páraic Duffy at the launch of the 2015 GAAGO online streaming service, a joint venture with RTÉ, “but my understanding is that the priority is to get Casement and Páirc Uí Chaoimh built.

“The idea has always been there. In the ideal world you would have a stadium of around that somewhere near Dublin but I think at the moment the next few years in terms of financial resources – our investment in Páirc Uí Chaoimh is well known; €20 million is the direct GAA contribution and Casement is roughly the same. That’s broadly €40 million.”

The idea of a second stadium in Dublin for Gaelic games was mooted as far back as the report of the 2002 Strategic Review Committee. O’Neill raised the issue when discussing the controversy over the permanent siting of Dublin’s football championship fixtures at Croke Park.

Duffy agreed however with desirability of the concept at some stage in the future.

“That is an idea we would have but it’s not short-term. We simply wouldn’t have the resources to do it. It’s not going to happen in the next three years, let’s say. Our goal would be to get Páirc Uí Chaoimh completed and Casement completed and get Hawk-Eye into those places. There’s also a lot of work on health and safety upgrades. That’s the priority.

“Obviously the Rugby World Cup will mean hopefully improvements to stadia as well. Beyond that then the priority might be another stadium around Dublin.”

On the overall question of Dublin’s Croke Park tenancy, Duffy said that he could only speak about the county’s league matches, the Spring Series, which have been staged in the stadium for the past four years and which will again go ahead in the new year.

“The championship is a matter for Leinster Council. I understand why. The reason they are playing Dublin at Croke Park is largely financial. You’ve the same issue with the spring series. This came up last week. Dublin are going to play their home games in Croke Park and I agree with that.

“Donegal’s one of their first games in the league. You’ve a choice between Parnell Park with a capacity of 8,000 and Croke Park where you’d have I’m sure 25,000. Forget about finance: you have to play it in Croke Park. You can’t say to 17,000 people who’s like to go to the game, ‘well, sorry, you can’t go. We don’t have a stadium to take it.’”

On the subject of the GAAGO streaming service, the Director General was asked about the impact in Britain where the exclusive Sky package of championship fixtures, which in the territory includes the All-Ireland quarter-finals, semi-finals and finals, are not allowed to be streamed.

“Obviously, through Sky you are able to access big numbers, which you would never do through GAAGO so I think it’s a fair balance. I wouldn’t have a concern about that.”

He said that the streaming service isn’t expected to generate substantial revenue. “I don’t expect this to be a cash cow or anything like that. The big issue for us has always been making the games available in the highest technical quality possible. That’s been the big plus.”

According to Múirne Laffan, managing director of RTÉ Digital, the GAAGO service had progressed from a launch last May to going live a month later and by the end of the championship it had been subscribed to in 157 countries.

Peter McKenna, GAA commercial director, added that the service had ended up with a cumulative reach of 400,000. Subscription rates for 2015 are €160 for a global pass and €100 for a British pass.

It was also announced that a new 2015 Club Scheme, enabling overseas clubs to secure 10% of the price of a GAAGO Season Pass and GB Pass, when subscribers use a club-specific promotional code when purchasing. For further details on the scheme as well as links to buy the passes as Christmas gifts can be found on www.gaago.ie.